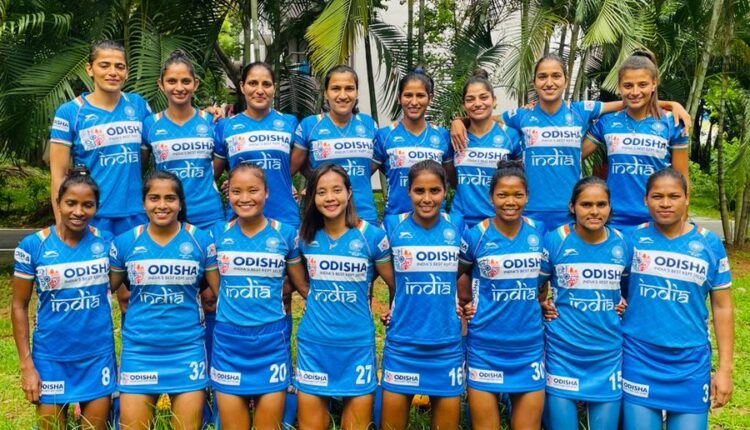 Bengaluru/Bhubaneswar: With India gearing up for tough competitions at the upcoming Olympic Games 2020, Hockey India today announced the women’s squad that will represent the country in Tokyo.

Deep Grace Ekka, the lone player from Odisha, has been selected in the 16-member squad, to perform as the defender in Team India at Tokyo Olympics 2020.

The final squad includes eight stalwarts — Rani, Savita, Deep Grace Ekka, Sushila Chanu Pukhrambam, Monika, Nikki Pradhan, Navjot Kaur and Vandana Katariya — who had the experience of representing India at the historic appearance of the Indian women’s team at the 2016 Rio Olympic Games after a gap of 36 years.

“The 16-member squad strikes the perfect balance between continuity from the Rio Olympics 2016, and adopting a fresh approach for Tokyo. Eight experienced veterans have been named in the squad, while eight new players have been handed the chance to make their Olympic debut for Team India,” Hockey India said in a release today.

These eight players have amassed a mammoth total of 1,492 caps between them for Team India and will be tasked with leading the charge for Team India in their quest for Olympic glory, it added.

Speaking on the team selection, Chief Coach Sjoerd Marijne said, “This team has worked very hard over the last few years and has made progress consistently. There’s a good mix of experienced players and new talent, which is excellent. We look forward to taking on the best in the world in Tokyo. This is a team with a lot of potential and drive which we hope to channelise to our best performance yet.”

This will be the Indian Women’s Hockey team’s third appearance at the Olympic Games and their second consecutive outing, with previous appearances coming in 1980 and 2016. The Indian Women’s Hockey team have seen a steady rise over the past few years, clinching Olympic qualification for a historic second consecutive occasion on the back of their consistent performances in qualifying events. Since Rio 2016, the team has experienced the highs of winning the 2016 Asian Champions Trophy, 2017 Asia Cup, the Silver medal at the 2018 Asian Games and making it to the Quarter Finals of the 2018 Women’s World Cup for the first time in history.

The eight Olympic debutants include drag-flicker Gurjit Kaur, Udita, Nisha, Neha, Navneet Kaur, Sharmila Devi, Lalremsiami – who is the first player hailing from Mizoram in the team and Salima Tete – who led the Indian team at the 2018 Youth Olympic Games at Buenos Aires to a silver medal performance, also joins the team destined for Tokyo.

The Women’s Team; which made history in Rio in 2016 after making an Olympic appearance after a 36-year-long wait, will now be looking to make its mark in the Tokyo Olympic Games 2020. This team took the disconcerting news of the postponement of the Tokyo Olympics in its stride and used the additional year to solidify their preparation for the Summer Games, as they bid to become the first Indian Women’s Hockey team to win an Olympic medal. The team has left no stone unturned in their preparation for the year’s showpiece event, with challenging tours to Germany and Argentina in the early part of 2021 proving to be an ideal preparation against world class competition. A high intensity National Camp following the international tours has put the team in good stead ahead of the Tokyo Olympic Games.

The team continues preparations at the ongoing camp at SAI Centre Bengaluru with the games taking place from 23rd July to 6th August in Tokyo.