One more contestant from Odisha in KBC 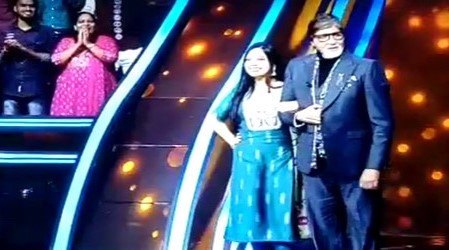 Pooja Tripathy, a resident of Sambalpur town, was selected to play the game hosted by Bollywood megastar Amitabh Bachchan.

Pooja, who had won a Miss Odisha runner up title earlier, is a homemaker. Her husband Karan Soudagar is a businessman in Sambalpur district.

She made preparation to make entry into KBC for past five years. After clearing seven audition rounds, now she had opportunity to reach the hot seat and play with the Big B.

Sitting on the hot seat along with the Superstar Amitabh Bachchan was not less than a dream for her. She described Big B as very supportive to her. Pooja shot for the show with Big B for two days in Mumbai.

Pooja entered the programme with her aunt Usharani Tripathy (father’s sister). The episode will be aired on October 31 (Monday) and November 1 (Tuesday).

Recently, Jyotirmayee Mallick from Odisha had participated in the KBC season 14. She had made Amitabh Bachchan emotional by reading out a letter which was penned by her and dedicated to Big B.

Skanda Sashti Tomorrow, 30 October 2022: Tithi, Rituals and all you need to know