One Person Dies On Indian Roads Every Three Minutes 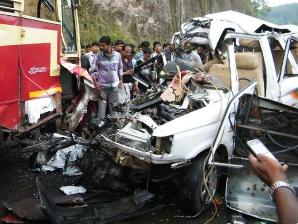 By Arvind Padmanabhan and Jaideep Sarin

Senior cabinet minister Gopinath Munde’s death in a car crash in the capital Tuesday brought into sharp focus once again the alarming number of fatalities on Indian roads with little thought on safety.

To put this disquieting data in perspective, almost half the equivalent population of some countries like Iceland or the Maldives is wiped out on Indian roads every year.

As per the National Crime Records Bureau (NCRB), under the Ministry of Home Affairs, as many as many as 461 people died and 1,301 more were injured “every day” from traffic accidents in the country during 2012. (See Separate Box on Key Data)

This makes it 19 deaths every hour or more than one death every three minutes.

Kamajit Soi, an international expert on road safety and vice chair of Punjab Road Safety Council, has incidentally written a letter to union Transport Minister Nitin Gadkari, seeking immediate steps to end what he terms as “massacre” on Indian roads.

“Over 1.2 million innocent people died on the roads in the last 10 years of the United Progressive Alliance (UPA) government. The last government did nothing to save lives,” Soi, an advisor on road safety to the Asian Development Bank, told IANS.

“We have been banging our head against the wall. No one is bothered. Hundreds of lives are lost every day. It is like jumbo jet crashing every day. I hope the Narendra Modi government takes steps to ensure Indian roads become safer. I’ve written to him too.”

Munde is among the several known people, including political leaders, who have died on Indian roads.

Little wonder the World Health Organization (WHO) says India accounts for the highest number of deaths in road accidents. China with 97,551, the US with 41,292 and and Russia with 37,349 have much lower deaths on their roads but with much more cars.

“Worldwide, over 1.4 million lives are lost annually; India is contributing 11 percent (to it),” Soi said.

“The incidence of accidental deaths has shown an increasing trend during the period 2003-2012 with an increase of 51.8 percent in the year 2012 as compared to 2002,” the bureau said in its report “Accidental Deaths and Suicides in India – 2012”.

“The population growth during the period 2003 to 2012 was 13.6 percent whereas the increase in the rate of accidental deaths during the same period was 34.2 percent,” the report added.

At the same time, the report said, road accidents in the country may have come down marginally by 0.02 percent during 2012 compared to 2011, but the casualties have increased by 1.6 percent.

Among the causes of accidental deaths in 2012, road accidents topped the list with 35.2 percent, while rail-road accounted for 7.4 percent of the deaths.

In sheer numbers, as many as 168,301 people died in the country in 2012 from traffic accidents with road accidents accounting for 139,091 — this is almost half the population of countries like Iceland and the Maldives.

“It’s not the killer roads alone where road safety is compromised. Even auto-makers continue to sell vehicles that are hardly safe. India’s most successful car Maruti-800 alone has accounted for over 700,000 deaths since it was launched in 1985,” said Soi.

“Such cars have been nothing but moving coffins.”

– Overall, 1.2 million perished on Indian roads in past decade

– 381 deaths and 1,287 injuries every day due to specific road accidents

– 73 deaths every day due to truck accidents

– 89 deaths every day due to two-wheeler accidents

– WHO says India accounts for the highest number of deaths from road accidents.

States asked to earmark dialysis facility in case of rise in…