The picture of a mobile phone being stationed in an open area at Laimura village in Deogarh to receive better signals for smooth conduct of online classes says it all. 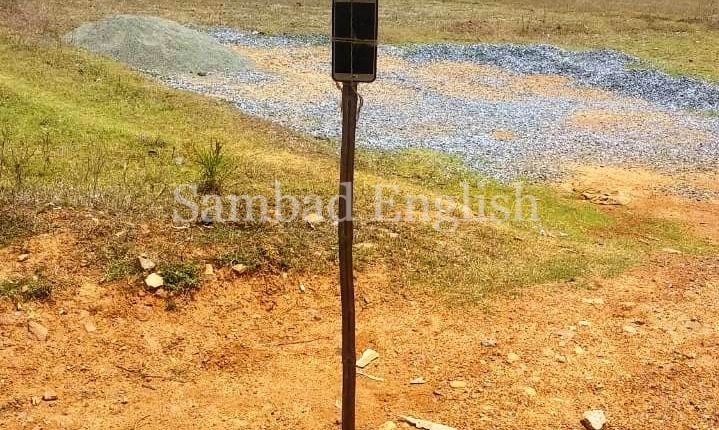 Deogarh: While the state Government has announced provision of online coaching classes for school students in view of the uncertainty looming over the COVID-19 lockdown, poor mobile services in  six Gram Panchayats under Tileineni block of Deogarh district reveal the ground reality.

In fact, people in the villages are still struggling for proper network for phone calls, let alone availing other online services being provided under various Government schemes.

Though the School and Mass Education Department recently announced that teachers will impart coaching to school students through mobile app WhatsApp, the idea does not seem to have made any difference in the six GPs of Teleibeni block.

The picture of a mobile phone being stationed in an open area at Laimura village under Tileibeni block says it all. Reportedly, the phone was tied to a bamboo stick to receive better signals for smooth conduct of online  classes.

One of students attending the classes said, “It’s very difficult for us to study this way as the network services here are very poor and the internet slows down very often.”

Besides Laimura, villages under five other GPs-Gandam, Jharagogua, Jharmunda, Parposi and Dimirikuda- are sharing the same situation. Although all the six GPs have separate mobile towers standing in the respective areas, network fluctuation has become an everyday issue for the locals. While some areas receive poor network, people in many other areas spent days with no mobile network at all. This has resulted into a great communication barrier as the villages are failing to receive many important information and also not being able to report about any mishap occurring in the area.

The six villages host a massive tribal settlement. Due to barriers in communication, the villagers in the recent past were not being able to avail benefits under various Government schemes which had put the development of the area on a pause making it a Maoist hotspot for long.

Fortunately, with frequent combing operations, the region was later freed from Maoist dominance. However, the communication issue still persists.

“As the Government has digitalized many of it’s welfare programmes, locals from the villages travel all the way to Deogarh town to avail the benefits. The villagers have raised the issue of the poor mobile services before the administration umpteen times, but to no avail, ” alleged a local of Laimura.