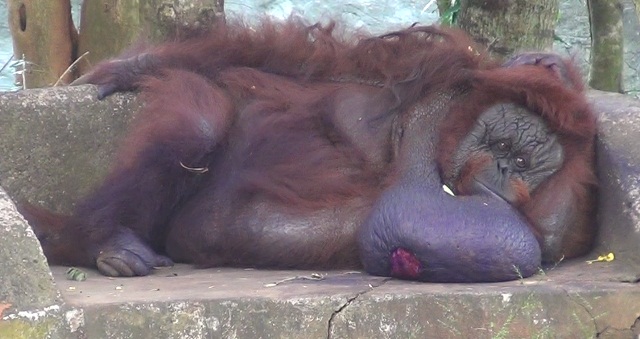 Bhubaneswar: Binny, the only Orangutan of India residing at Nandankanan Zoological Park on city’s outskirt here, is undergoing treatment for infected wound on her throat.

The zoo authorities expressed concern over deteriorating health condition of Binny, who is in her old age and suffers from multiple ailments.

The 40-year-old female Orangutan Binny, who is staying at enclosure number 31 (B) in the zoological park, is being kept out of visitors’ display. The authorities have covered the enclosure with polythene. She has been undergoing treatment to recover from wound infection in the past one year.

Binny is suffering from pain due to foul smelling drainage from the wound that has been infected. The wound also causes itching and the size of wound is becoming bigger day by day due to release of plenty of blood. Even after the veterinary doctors of Nandankanan have been treating her by administering the injections and medicines, no improvement is seen so far in condition of Binny and her wound on the throat. She is provided the multivitamins to get rid of fatigue and weakness caused due to old age, sources in Nandankanan said.

The sample collecting from wound has been sent to OUAT for examination. Binny will undergo further treatment following the report from OUAT, Nandankanan authorities said.

As Binny is at her old age, it is not possible to treat her using anesthesia, said the vets.

Binny was brought to Nandankanan from Pune’s Rajiv Gandhi Zoological Park on November 20, 2003 when she was only 25 years old. Since then she has been staying at Nandankanan alone as the authorities could not bring a partner for her. If she dies due to age related ailments and wound infection, the Orangutan species will be extinct from the country.