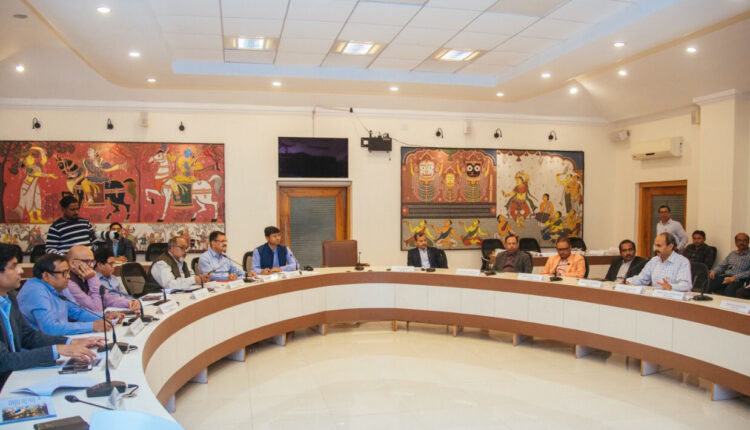 Bhubaneswar: With just a few weeks to go for the FIH Odisha Hockey Men’s World Cup, the organising committee of the mega event co-chaired by Chief Secretary of Odisha Suresh Chandra Mohapatra, President Hockey India Dilip Tirkey and Chief Minister’s Office (CMO) reviewed the preparations of different state Departments and districts for the successful conduct of the event.

At the core of the discussion were Stadium readiness, connectivity, hospitality, community outreach, safety and security, traffic and crowd management, World Cup celebrations and city festivals, hospitality and medical arrangements amongst others.

It was informed that the Department of Sports and Youth Services has allocated a budget of Rs 75 crore during the FY 2022-23 for the Hockey World Cup.

FIH has already certified the four turfs; two at Kalinga Hockey Stadium that were recently re-laid and the two new turfs (main and practice) laid at the Birsa Munda Hockey Stadium. The lighting systems have also been operational in both stadiums with certification.

The Mo Bus services in Rourkela will be operational from January and the services in Bhubaneswar are being augmented. It was decided that the spectators with match day tickets will be allowed Mo Bus travel free of cost.

The security arrangements and traffic and parking management were discussed in detail to ensure a safe, secure and smooth experience for the spectators.

The Hockey World Cup Celebrations event in Cuttack on 11th January was also reviewed in detail.

The 5T Secretary to Chief Minister VK Pandian conveyed the direction of the CM that the celebrations be organised across all the districts in a grand manner involving the communities, schools, colleges etc. It was announced that there will be prizes for the best-performing districts. It was discussed with the Collectors regarding the arrangements for the city and district-level festivals. The Trophy tour will cover all the districts in Odisha.

The host cities of Bhubaneswar and Rourkela are being upgraded and beautified to make it ready for the Hockey World Cup. It was directed that all the works should be completed at the earliest.

The Organising Committee expressed satisfaction over the progress of the works. All the officials present were requested to put in their best efforts and ensure that the Hockey World Cup is a grand success.

The various department senior officials and Hockey India officials were present during the discussions.

The embark of a small town startup, imprinting itself on the nation