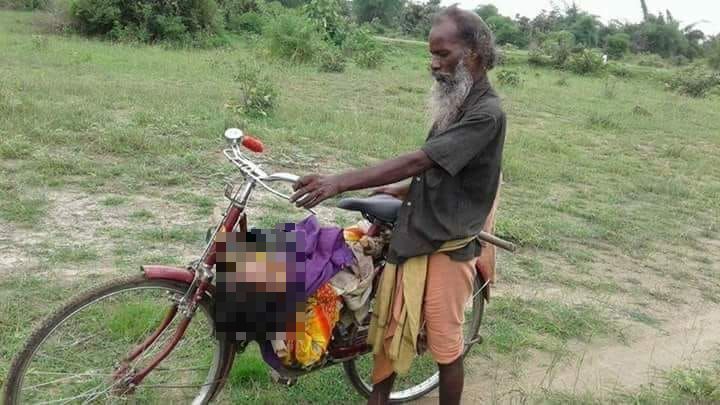 Boudh: Ostracisation turned ordeal for 60-year-old Chaturbhuja Banka of Krushnapali village in Odisha’s Boudh district on Wednesday morning as no one in the locality shouldered the lifeless body of his sister-in-law Pancha Mahakud (42) as he was declared a social outcast.

Left with no other option, Chaturbhuja carried the body of his sister-in-law on a bicycle towards the graveyard and cremated it.

Humanity died along with the woman as villagers took photos of the incident through their mobile phones but did not help Chaturbhuja in carrying the body.

Pancha was staying with her brother-in-law Chaturbhuja after her parents passed away. On Tuesday, she suffered from diarrhoea and was admitted to Boudh Hospital where she passed away.

An ambulance brought her body to Chaturbhuja’s house from the hospital on Wednesday morning. The elderly man requested villagers to help him carry Pancha’s body but in vain as no one turned up.

Chaturbhuja had opted for a second marriage and was ostracised by the villagers as the woman belonged to other caste, reports said.

Doctor dies as bus runs over him in Odisha capital