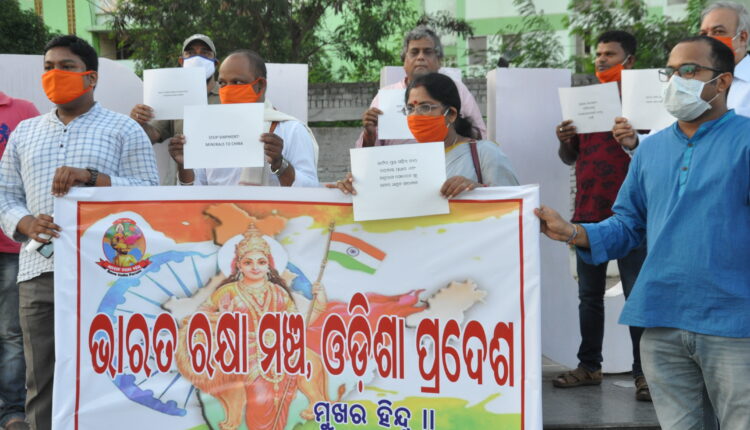 Bhubaneswar: The Bharat Raksha Manch today organised a protest against the Chinese incursion and attack on Indian soldiers at Station Square here.

The members of the outfit condemned the barbaric and savage attack by the Chinese Army. The protesters raised slogans of “Bharat Mata ki jai, Vande Mataram.” They also carried banners that read: “We support the Indian Army, Boycott Chinese Goods, Stop exports to China”.

The President of the State Unit of the Manch, Dr. Ashok Acharya said that the time has come for effective measures to boycott Chinese imports. He said that is was a farce that while we speak of self reliance, we are exporting raw materials to China. He said that even the present day status of Paradip Post Trust’s Traffic Report shows that out of the 25 ships in the berths and anchorage, 20 are ships which are taking iron ore to China.

Advocate Sanghamitra Rajguru said that the time has come for the citizens to take drastic actions. She said that concrete steps should be taken for promoting local industries. She said that all Chinese Apps should be banned forthwith, and no fresh Chinese should be allowed in India. The State General Secretary of the Manch, Pradeep Kumar Tripathy is of the opinion that just offering lip service will not be effective; there should be a people’s movement against China.  He said that time has come to start awareness campaigns among the rural and urban population and bring together massive support from all citizens to boycott all Chinese products.

Anil Dhir, the National Secretary of the Manch said that the Chinese army has violated all norms, whereas India has been supporting China by allowing investments worth billions. He said that the RBI should withdraw the license it has given to the Bank of China, and that India should withdraw the Most Favored Nation status accorded to China like it has done for Pakistan.

A biopic on Sushant Singh Rajput on the anvil