Over 150 houses gutted at three places in Odisha 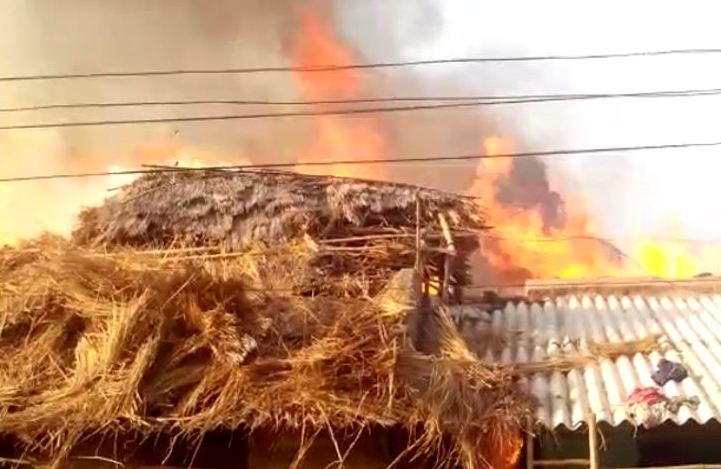 Over 150 houses were reduced to ashes in devastating fire that broke out at three places across Odisha today.

At least 100 houses were gutted this afternoon at Dhobaninanda village under Hindol block in Dhenkanal district.

While property worth several lakhs was gutted in the fire mishap, 20 goats were burnt alive. However, no loss of human life has been reported.

Four fire tenders were rushed to the spot and pressed into service to douse the fire. The mishap occurred when most of the villagers were attending a marriage party in a nearby village.

Though the cause of fire mishap is yet to be ascertained, short circuit is suspected to be the cause behind the mishap.

Senior officials of the district administration rushed to the spot and took stock of the situation.

“Preliminary assessment reveals that around 70 to 80 families and 100 to 150 houses have been affected in the fire mishap. Cooked food is being arranged by the district administration for affected villagers and it will continue for three days,” said Hindol Sub Collector Atulya Champatiray.

Besides, tehsil officials are assessing the loss of property. Financial assistance will be provided to totally and partially affected people as per relief code, he added.

Similarly, 38 houses and property over lakhs were gutted in fire mishap at Behera village under Ambabhona block in Bargarh district today.

Fire tenders from Ambabhona and Bargarh were rushed to the spot and doused the fire.

Villagers have claimed that the mishap occurred after a heap of rice straw caught fire reportedly due to electric spark from wires running over it.

In another incident, as many as 10 houses were gutted in Angul district.

All set for first international flight from Odisha capital Wednesday