Over 4,000 migrants return to Odisha in special trains 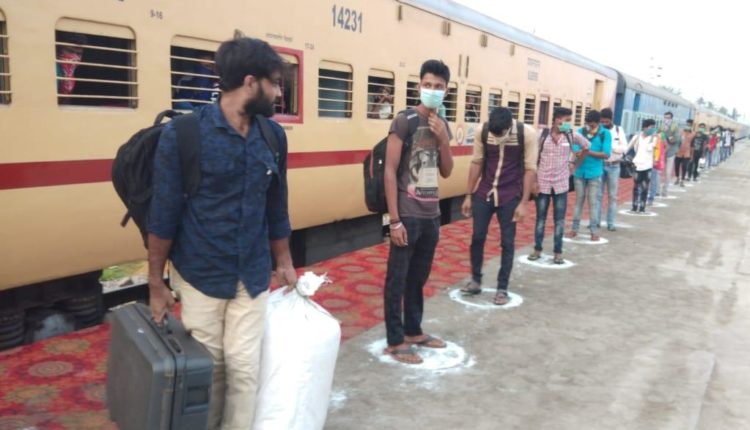 Bhubaneswar: Over 4,000 Odia migrants stranded in Maharashtra and Gujarat due to the lockdown, returned to their native state in four special trains on Sunday, officials said.

Another 5,000 migrants are expected to reach Odisha in five special trains originating in Gujarat, Maharashtra and Tamil Nadu, they said.

A special train carrying around 1,200 Odia migrants from Panvel railway station in Maharashtra arrived at Titlagarh station in Bolangir district. The returnees were sent to different parts of the state from there, an official said.

The administration imposed a curfew in Titlagarh town during the day to prevent large gatherings and ensure smooth arrival of the returnees and their onward journey to their home districts by buses, he said.

The migrants were offered food packets, water and other essential items before they left for their home districts, where they will be placed under institutional quarantine, the official said.

Around 1,200 Odia migrant workers arrived at Jagannathpur station in Ganjam district from Surat in Gujarat, he said, adding that the returnees were asked to maintain social distancing.

Two more special trains brought migrant workers from Ahmedabad in Gujarat to Khurda Road railway station from where they were sent to quarantine centres, the official said.

While two trains from Ahmedabad are scheduled to reach Khurda Road, two more from Panvel and Surat will reach Titlagarh and Jagannathpur stations respectively, he said.

Another train will bring back stranded migrant workers to Jagannathpur station from Chennai, the official added.