Oxygen crisis: IIT-Bombay comes up with a solution 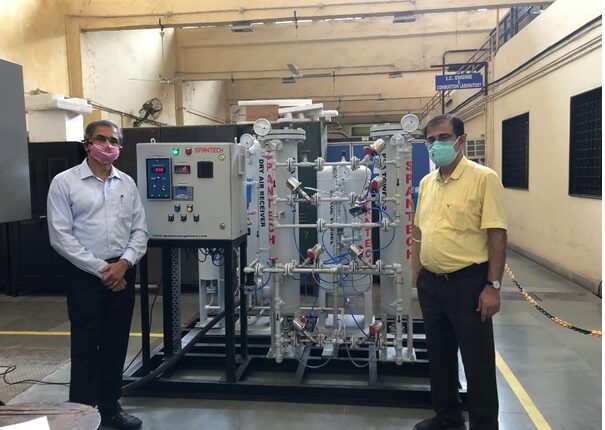 Mumbai: The Indian Institute of Technology (IIT) Bombay has come up with a creative and ingenious solution to address the shortage of medical oxygen for the treatment of COVID-19 patients in the country. The pilot project which has been tested successfully relies on a simple technological hack: conversion of PSA (Pressure Swing Adsorption) Nitrogen Unit to PSA Oxygen Unit!

Initial tests done at IIT Bombay have shown promising results. Oxygen production could be achieved at 3.5 atm pressure, with a purity level of 93% – 96 %. This gaseous oxygen can be utilised for COVID-related needs across existing hospitals and upcoming COVID-19 specific facilities by providing a continuous supply of oxygen.

How can the nitrogen unit be converted into an oxygen unit? “It has been done by fine-tuning the existing Nitrogen Plant setup and changing the molecular sieves from Carbon to Zeolite,” said Prof. Milind Atrey, Dean (R&D), IIT Bombay, who led the project.

“Such nitrogen plants, which take air from the atmosphere as raw material, are available in various industrial plants across India. Therefore, each of them could potentially be converted into an oxygen generator, thus helping us tide over the current public health emergency”, he added.

A PSA Nitrogen plant in the Refrigeration and Cryogenics Laboratory of IIT was identified for conversion, to validate the proof of concept. To undertake this study on an urgent basis, an MoU was signed between IIT Bombay, Tata Consulting Engineers and Spantech Engineers to finalise a SOP that may be leveraged across the country.

Spantech Engineers installed the required plant components as a skid at IIT Bombay for evaluation using IIT Bombay’s infrastructure at the IITB Nitrogen facility at the Refrigeration and Cryogenics lab. This setup for the experiment was developed within three days, and the initial tests have shown promising results, as mentioned above.

Congratulating the teams on the successful pilot in a timely manner amidst several constraints, Amit Sharma said, “We are delighted to partner with IIT Bombay and Spantech Engineers, and contribute towards an innovative solution for emergency oxygen generation using existing infrastructure towards helping the country tide over the current crisis. Such partnerships between industry and academia can accelerate our vision towards the Atma-Nirbhar Bharat.”

Prof. Subhasis Chaudhuri, Director IIT Bombay, congratulated all the involved parties and said that such partnership between academia and industry is highly desirable and essential for the growth and success of the nation.