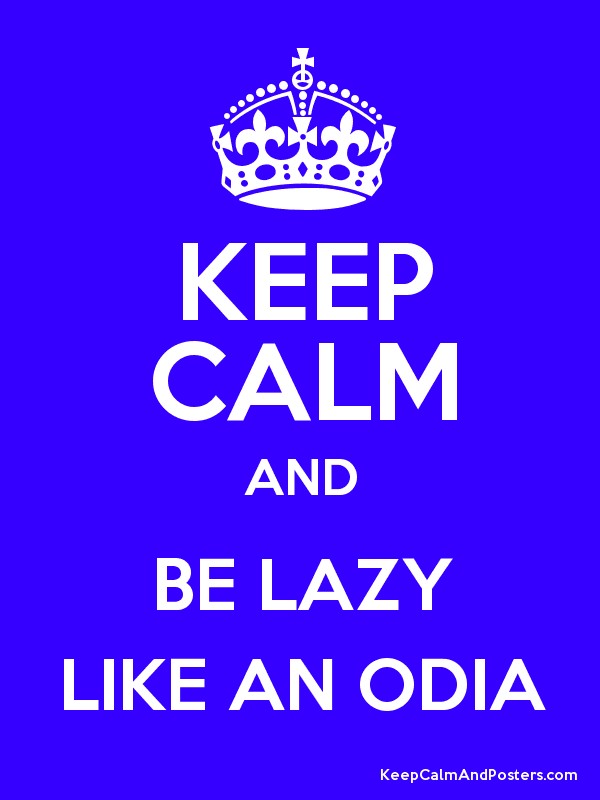 [Disclaimer: This piece of writing contains materials that you may find objectionable, encouraging rest of the communities to poke fun at you and demeaning an average person’s self-esteem. While proceeding you are admittedly siding with the author’s views and reading at your own risk. Go back if you are not.]

I am an Odia. Proud or not – that’s a separate debate. Let it be without any adjective at this stage.

Odias are addressed with several endearments: ‘Alasua Odia’, ‘Odia Kankada’, ‘Odia Mendha’, ‘Dekha-Sikha-Odia’, etc.                (Leaving some space so that you can expand the list based on your own real life experiences.) Each of these endearments have their unique anecdotes, which require separate elaboration. All in all, Odias are generally referred to as a community lacking self-esteem, unable to underline their dignified identity, non-aspirational, homesick, without killer instinct, simpletons and so on. It bothers me too. But, what to do?

We have a few successful examples to flaunt. But I doubt, whether they would stand up to our cause and endorse their roots at this stage in life. So guys, it’s a lone and long battle. Let’s fight it out.

Ages ago the great Godavarish Mohapatra had written a scathingly brilliant piece (Utha kankala chhidu shrunkhala.. et all); to wake us up. We have played that alarm umpteen times during every auspicious community festival. It hardly helps. There must be solid reasons as to why we are, the way we are. I went for a background check. And what I found will open your eyes too. Here it goes:

It’s a DIY task. Ask ten Odias what they ate for breakfast today. The spread will spin your head. From paratha to rava dosa, bread, chakuli, idli, chuda santula, bara-ghuguni and much more. Some go with mummy-bhuk-lagi wala Maggie too. Now go to any Punjabi home. Standardized menu in Punjabi homes, cutting across socio-economic class. It has to be paratha and pickle; lassi and its cousins are all top-ups.  Similarly, ask a Telugu, Tamil or Mallu, each one would invariably tell a dosa or idli story.  Bengalis are grabbing the manufacturing rights of Roshogulla by both hands and looks like we have just lost it!

What does it hint at?

Guys, we have messed it up. And hey, if you are about to boast the Dalma thing now, let me tell you about our self-patented Dalma. When we put all damn veggies on earth and boil them together with lentil and spice it up with five phutanas, the outcome is nothing but confusion-in-a-semi-solid state. My North Indian wife fondly calls it the Odia sambar, without tamarind, of course.

From lungi to shorts, from dhoti to denim, chudidar, Pathani suit, we have tried it all. Our women look ‘different’ in jeans, capris, tops, leggings, dresses, gowns, lehenga and of course, the quintessential sarees. Here’s a question for the ladies, especially those who have moved in to cities from villages: Why do you wear a ‘nighty’ throughout the day? Doesn’t the name indicate something to be worn during the night?

Agreed that it gives comfort and covers up vital stats like no other. But in the wee hours of the day, when you pluck flowers from the other side of your neighbour’s boundary wall lifting your heels, don’t you get scared? What if a naughty chameleon or slimy spider crawls up beneath your nighty?

I am already sounding sexist. (Please refer to the disclaimer above)

How many Odias we meet outside the state, converse in their mother tongue? Some Dinesh had introduced himself as Danish to the legendary singer Akshaya Mohanty in a Lufthansa flight. The singer sized him up after finding out the truth from his typical accent.

We have immense love for our CM: elected him with thumping majority for four consecutive terms. Besides his other enviable attributes, what we love the most in him is, his incompetence to handle our language. Once in a while whenever he attempted to speak in Odia, (may be due to political compulsion) we encouraged and applauded. He thought it worked. Not knowing Odia, is actually considered “cool” in Odisha.  And, here look at me! I could have easily written the same stuff in my language. But, that would not have attracted your eyeballs. Who doesn’t want to appear brilliant in an era of extreme self-obsession? Most our leaders, who frantically try to instill in us the importance of learning Odia, covertly send their kids to convent schools. Obviously, they also know, with this gasoline the career rocket of their kids can’t scale the sky.  Proactive measures, I must say!

Our love for language is also evident from what we watch. Our women watch Hindi serials. Star Plus gains more TRP from Odia homes than other non-Hindi speaking markets. We handsomely contribute our bucks to the box office success of Shah Rukh and Salman. It is another thing that our cinemas are ‘different’. Outcome of many brainstorming sessions that gave birth to camouflaged titles like ‘Ishq Tu hi Tu’, ‘Love Master’, ‘Love you Hamesha’, etc. and scene-by-scene aping of many blockbuster south flicks once had the hope of minting millions in multiple states.

But here, our cattle class viewers packed them off after a few trials.  For a few years, I was acting as the convener of a popular TV channel’s prestigious film awards. During the screening, I had jokingly told the jury, “Perhaps, it is much easier making Odia films, than watching them”. They all laughed in affirmation.

Being multi-lingual is a global thing. And I must say, in this race, we have beaten all other communities, long ago. Reason to rejoice!

Being Hindus, our hands were already full. Legends say, once upon a time we had a whopping three hundred thirty three million Gods, more Gods per head. Since they were seen before the formation of the earth most of them are extinct today. We still have some, though. For easy handling, we have classified them according to the days of the week. Sunday for Surya Dev, Monday for Siva, Tuesday has two: Hanuman and Mangala, Wednesday is unoccupied and blocked for those who relish mutton-fish-chicken, Thursday is a strict one and no one dares to mess up with Lakshmi. Sai Baba is a recent addition to the list and he chose Thursday. But he is quite liberal. Some fear he might go up in ranking soon. Friday is reserved for Santoshi Maa, and the mighty Hanuman ji again blocked Saturday. Saturday is also for Shani Dev, who is now in the national news for wrong reasons. Apart from this, we have several babas—self-proclaimed demigods—sneaking into the religious racks of our brain. So far, we are handling them really well.

We have our own local God, too. Fondly, we refer to him as ‘Lord of the universe’. It is another thing that after redefining the meaning of ‘universe’ we handed over the power of attorney to the pandas, perpetually. Odias love to flaunt Him on and off. He is a large-hearted guy. Eats a lot. Rests a lot. Moves out in style once in a year and does not give a damn even if you abuse him or his family. Gosh! All traits match with us. And, that’s why we have such unconditional love for him.

Our poets and lyricists have composed many heartwarming bhajans to please Him. If you care for the meaning, you will mostly find them uninspiring, portraying our poverty and lacking any aspiration. Sample a few…Kalia re kalia ..e janam pare aara janamku karibu mate to jami halia (Oh dear lord, in my next life make me a bonded labour in your field).

Guys, we wanted this and if he listened to our prayers; should we now blame him? Not really.

Look at another one: Jagannath kichhi magunahi tate, dhana magunahi, jana magunahi, maguchi saradha bali ru haate (Hey Lord of the universe! I expect nothing from you. No wealth. No family. Just allot me few square inches from your sacred courtyard).

This is precisely the reason why our land prices have gone up. Imagine when the population of over 40 million starts singing this undue demand in sync and extends their begging hands, any supply line would choke. We love calling ourselves bhikari (beggars) too.

Ever heard of ‘Itni shakti hame dena data..mann ka biswas kamzor ho na…’ ? Why have we never had a counterpart of this one in Odia? No one even attempted a translated version. Didn’t we do enough plagiarism in the past and straight lifted many modern tracks from other languages? Simple. It never occurred to us. When we don’t ask for it, opportunity changes hands. And God has a much bigger territory to look after. So things go out of our kitty just like most of Modi’s sanctions go to other favouring and deserving states and Naveen Babu screams ‘Kendro Obohela’ here.

Guys, this must stop. We need to wake up!

Today is Odia Naba Barsa. Not a day to swallow so much negativity and bash our own roots. Although with disguised acronyms, many friends in social media are going crazy over #OdiaNuaBarsa and #PanaShankranti. I really love connecting with those guys! Apps that help us type flawless Odia are coming in handy to greet each other on special days. #OdiaNewYear is trending like #PakhalDibasa and #UtkalaDibasa.

I was halfway through writing this blog, when my non-Odia wife came up with a different perspective. She finds Odias to be truly broad-minded and large-hearted. They are not the intolerant types doing rounds these days. Odias actually adapt to things so fast. Aha!I liked it. Agreeing to your wife has always been a tried, tested and recommended mantra for a happy marriage. Otherwise these two words ‘happy’ and ‘marriage’ mostly appear under antonyms.  And here she was, praising my community for a change.  I felt quite elated. Felt like celebrating being an Odia—one of the funniest, friendliest and non-controversial communities in the entire world.

Ratikant Satpathy is a Management Consultant *