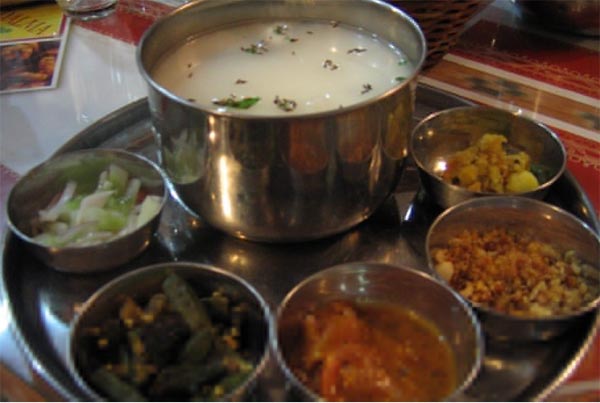 Of course it is Pakhala time!!

With temperatures soaring up like mad the food pattern too changes in Odisha. The grueling summers will bring in early morning classes, morning office and everything possible that would give a little respite from the cruel summer heat and humidity. In the Odia kitchen the cuisine takes a turn  from rich, spicy curries to the simple Pakhala or water rice.

Interestingly the term Pakhala comes from the ancient Pali word pakhaliba as well as the Sanskrit word Prakshāḷaṇa which means “washed/to wash”. It is unknown when Pakhaḷa was first included in the daily diet of Eastern India, but it was included in the recipe of Lord Jaganath in the Puri temple during circa 10. The word owes its origin to the Sanskrit word Paka that means taste. The tribal equivalent of the word refers to something that is fresh and energetic.

Pakhala is a great social equaliser which breaks all caste, creed and class barriers. Summer and Pakhala are synonyms for Odias and is the best choice of food when temperatures become unbearable at 42 degrees Celsius and above.

In Odia marriages Pakhala plays an important role as the bridegroom is served dahi Pakhala and fish fry before the bidaii, as it is supposed to be auspicious. The simple Pakhala is given a delightful twist when flavours  are added  like – Jeera Pakhala, Dahi Pakhala, Lembu patra Pakhala, Baasi Pakhala, Saja Pakhala etc.The torani or the water of the cooked rice is the most sought after as after eating the rice one is supposed to drink the water. Scientifically this is a wonderful coolant and also hydrates the system. In the Jaganath temple at Puri, tanka torani is in great demand by devotees. Tanka torani is the mixture of curd, water rice (Mahaprasad), lemon leaves, green chili, ginger and salt.

Pakhala is served in various ways : Jeera (Cummin)  Pakhala : The jeera seeds are spluttered in a little oil with dry red chilies and the Pakhala is tempered with this. Sometimes the cumin seeds & dry red chilies are roasted and powdered , to be added to the pakhala for an exotic flavour.

Baasi Pakhala: cooked rice with torani which is fermented overnight for the delicious sour taste.