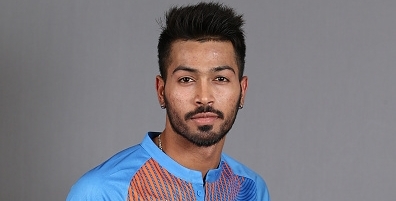 Chennai: India rode on Hardik Pandya’s all-round brilliance to thrash Australia by 26 runs by Duckworth-Lewis method in a rain-truncated opener of the five-match One-day International series at the M.A. Chidambaram Stadium here on Sunday.

After guiding India to safety with a career-best 83 off 66 balls, the 23-year-old Pandya starred with the ball, picking the key wickets of Australia skipper Steve Smith (1) and Travis Head (5) to enable the hosts go 1-0 up in the series.

Chasing a revised target of 164 from 21 overs after a spell of heavy showers truncated play, Australia were reduced to 29/3 with debutant opener Hilton Cartwright (1), Smith and Head back in the pavilion.

Such was India’s domination in the second innings of the match that only three of the visiting batsmen could manage to reach double-figures and Australia were restricted to 137/9.

After surviving a leg before scare, Smith mistimed the next delivery and ended up top-edging it high in the air which Bumrah brilliantly pouched at short fine. In no time, Head, too, was back after feathering a nick to stumper Mahendra Singh Dhoni.

Seasoned opener David Warner (25 from 28 balls; 4*2) offered some resistance but the introduction of chinaman Kuldeep Yadav brought his downfall, comfortably caught behind by Dhoni.

Reduced to 35/4, the visitors were left high and dry until the big-hitting Glenn Maxwell (39 from 18; 4*3, 6*4) arrived and milked 22 runs from Kuldeep’s third over, including three consecutive maximums.

Maxwell managed to bring the mounting required run-rate down but leg-spinner Yuzvendra Chahal’s flighted delivery did the trick for India, as the Australian holed one to Manish Pandey at long on.

Kuldeep immediately got rid of the next man, Marcus Stionis (3) with a floater which substitute fielder Ravindra Jadeja comfortably latched on at deep mid-wicket.

For the hosts, Chahal was the pick of the bowlers with figures of 3/30, while Kuldeep and Pandya contributed with a couple of scalps. The pace duo of Bhuvneshwar Kumar and Bumrah also picked one wicket apiece.

Earlier, contrasting half centuries from all-rounder Hardik Pandya and Dhoni helped India recover from a precarious 87/5 to post a healthy 281/7.

The 23-year-old Pandya meted out special treatment to Adam Zampa, taking the young leg-spinner to the cleaners on three consecutive occasions to get to his third ODI fifty off 48 balls before falling to the same bowler, later in the innings.

Dhoni, at the other end, provided stability with a patient 75-ball 50 but more importantly carried on after the loss of Pandya to forge another healthy 72-run seventh wicket stand with Bhuvneshwar Kumar (32 not out from 30; 4*5).

India, too, were off to a forgettable start with three of the top four batsmen back in the hut with only 11 runs on the board.

Pacer Coulter-Nile made a stunning comeback to 50-over cricket by claiming opener Ajinkya Rahane (5), and skipper Virat Kohli and Manish Pandey (both for noughts) for the scorecard to read 11/3.

India opener Rohit Sharma (28) and Kedar Jadhav (40) brought some solidity with a 53-run fourth wicket stand before the last recognised batting duo of Dhoni and Pandya got their act together to deliver the needed stability.

The men-in-blue will now face the Kangaroos at the Eden Gardens in Kolkata on Thursday. (IANS)

Too early to decide fate of Tokyo 2020, says IOC chief