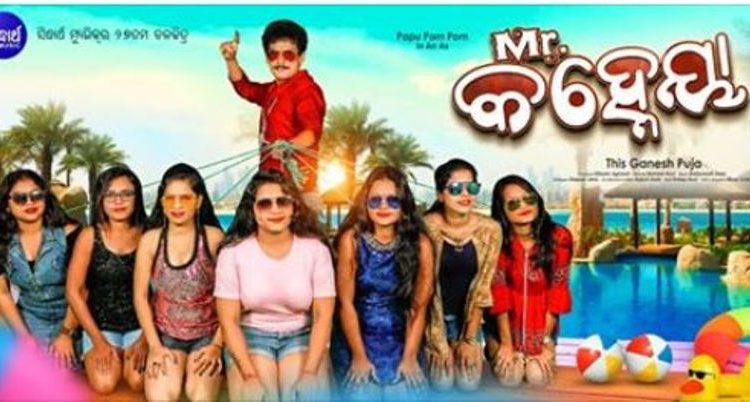 Bhubaneswar: Comedian and Ollywood actor Tatwa Prakash Satapathy, popularly known as Papu Pom Pom, who hogged headlines for wrong reasons in the recent past, has landed in a fresh controversy.

This time, the comic actor drew flak for the poster of his upcoming movie ‘Mr Kanhaiya’, to be released on September 1.

The recently-released poster showing the actor holding ropes tied to the necks of seven girls is being trolled by netizens across all social media platforms. Social media users, including sprinter Dutee Chand, have strongly criticized the poster as well as the production house.

Stating that the poster is an insult to the women fraternity, netizens have demanded immediate removal of the picture. They have also alleged that film producers are forgetting the values of Indian culture and tradition for the sake of money.

Dutee Chand took to Twitter and wrote, “I personally do not like the poster and strongly condemned the concept. The poster is a sheer disrespect to the women fraternity. I request the production house to remove the poster forthwith.”

However, a few sections of people came out in support of poster and the movie.

“The actor is just playing  his role as per the direction. As an audience you may comment on the content but not on the actors,” said another FB user.

It may be mentioned here that Papu is making a comeback to the Silver Screen with ‘Mr Kanhaiya’ after a gap of almost one-and-a-half years for his illness. The actor will be seen in a new avatar in the flick in opposite of actress Jhilik Bhattacharya. The film is being produced by Sitaram Agrawal and Namita Agrawal.

However, director Ramesh Rout said, “the poster has not been officially released by the production house. The poster has been posted on social media randomly. A meeting has been called in to discuss the matter .”