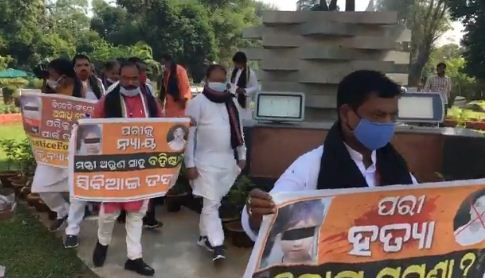 Bhubaneswar: Opposition BJP today in the Odisha Legislative Assembly intensified its demand for the expulsion of Minister Arun Kumar Sahoo from the cabinet in connection with the alleged murder of 5-year-old girl Pari of Jadupur village in Nayagarh district and a CBI probe into the case.

The BJP members created ruckus in the House over the matter, for which Speaker Surjya Narayan Patro adjourned it initially till 11.30 AM and later till 3 PM as din continued. BJP MLA Mohan Majhi was seen trying to climb atop the Speaker’s podium.

Legislators of the party also staged a dharna near the Mahatma Gandhi statue on the assembly premises holding banners and placards to press their demands.

On the other hand, Congress MLA Tara Prasad Bahinipati during the Zero Hour raised the matter of Gopalpur MLA Pradeep Panigrahi’s expulsion from the BJD and alleged his association with arrested and suspended IFS officer Abhay Kant Pathak and his son Akash Kumar Pathak.

Bahinipati further alleged that several leaders of the ruling party and non-Odia officers are involved in corruption in the state.

Panigrahi was today expelled from the primary membership of the BJD for his anti-people activities.