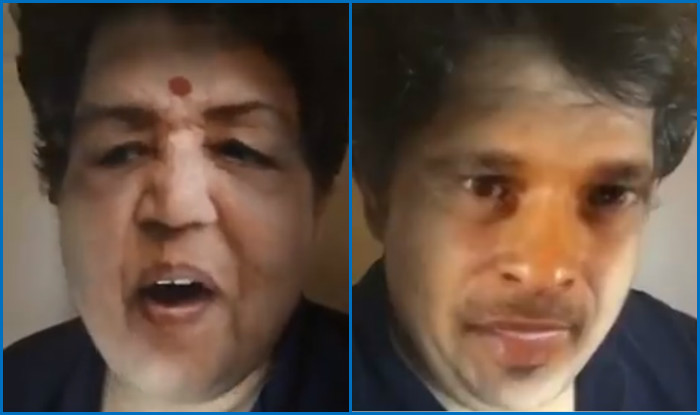 Maharashtra Navirman Sena vice-president Shalini Thackeray virtually laid siege at the Cyber Cell Branch of Mumbai police and vowed not to move out of the premises till Bhat was arrested. Her colleague, MNS Chitrapat Sena chief Amey Khopkar threatened to “beat” Bhat up wherever he was seen and stop his shows in the state.

Nationalist Congress Party state spokesperson Nawab Malik termed the video “in extremely bad taste” and demanded severest action against the perpetrators who have insulted two national icons of such repute.

The ruling coalition partners, Bharatiya Janata Party and Shiv Sena also sought that the video be deleted from all online media and most stringent action taken against its creators.

The video, which liberally ridiculed and ‘roasted’ Lata and Sachin, who are revered by their fans across the country and beyond, went viral on social media and other channels and triggered outrage all around.

The all-round condemnation since the past two days culminated in the MNS lodging police complaints against Bhat for the “highly objectionable content” of the video.

Our efforts will continue, Modi greets BJP workers on…

Among other things in the video, Bhat has shown a face-swap. Statements like why the 86-year old Lata was still ‘alive’ and who was the better player between the 43-year old Sachin and Virat Kohli have raised a howl of protests and condemnations.

While posting the video on May 26, Bhat posted on Facebook: “I make such nonsense on my Snapchat – follow me there – ID: Thetanmay (Also I obvously love Lata and Sachin, just having some fun).”

Mumbai police said that it had already contacted Google, Facebook, YouTube, SnapChat and other channels with a demand to delete the contentious video online.

Bhat was at the receiving end of celebrities on social media networks, with prominent personalities lambasting him for his crass humour.

Anupam Kher said: “I am 9 times winner of Best Comic Actor. Have a great sense of humour. This is NOT humour.”

“Absolutely shocked. Disrespect is not cool and neither is it funny,” said Riteish Deshmukh.

Celina Jaitley said she was “absolutely… Shocked and appalled. Not amused. Lata Mangeshkarji needs to be apologized to… NOW.”

He urged: “When you guys write about me tomorrow, can you please use my snapchat ID – it’s thetanmay thanks.” (IANS)

‘Sachin, Rekha should resign from RS if not…