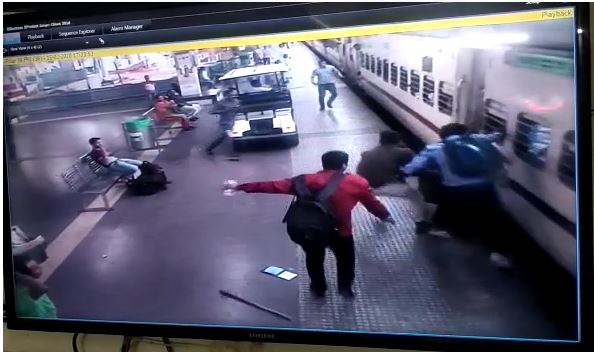 Bhubaneswar: A woman passenger had a narrow escape while trying to board the Puri-Sambalpur Express from Bhubaneswar railway station today afternoon.

The woman passenger, Nibedita Sahoo was saved by a Railway Protection Force (RPF) Constable on patrol who saw her slipping down towards the tracks and pulled her towards the platform.

Entry to Bhubaneswar railway station restricted from this side; here’re details

At around 5 pm, Nibedita was trying to get inside the running 18304 Puri-Sambalpur Express at at Platform 1 of Bhubaneswar railway station . While trying to board, she got imbalanced and fallen down in the gap of platform and the running train. The alert RPF constable, Subrat Kumar Maharana ran to her and pulled her away to safety within seconds.

The entire incident as captured in the CCTV cameras installed at Bhubaneswar railway station.

Nibedita works as a Lecturer of IT department at Ramadevi Women’s University, Bhubaneswar.

Ganja worth over Rs 5 lakh seized from Bhubaneswar Railway…