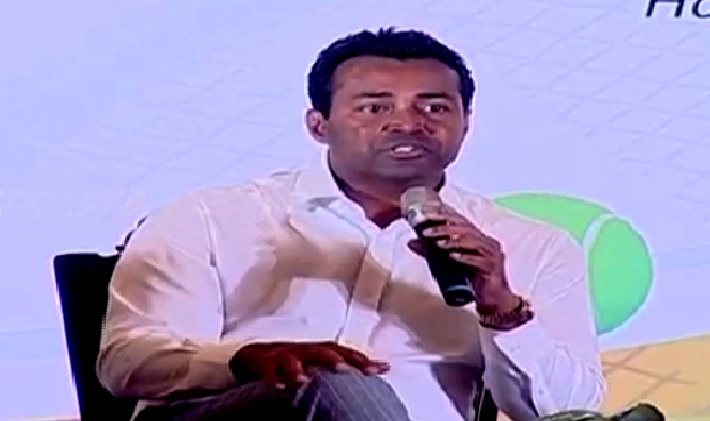 Bhubaneswar: “Regardless of your age, if you have patience to navigate the currents in life and still stay true to the essence you are, you can do anything,” said tennis star Leander Paes while addressing the audience at the 4th Motivational Talk organised by Odisha’s No 1 media conglomerate Sambad Group, here today.

A Padma Bhushan awardee tennis player Leander Paes began with sharing his journey from a dedicated football player to getting selected for Davis Cup at the age of 15 and later winning multiple Grand Slam titles.

He had to sacrifice his education at the age of 16-17 years to become a professional tennis player. On being asked by his father about his choice of tennis over other sports, he had said that if he trained well for tennis, he will bring gold medal for India without having to depend on ten other players in a team-game like football.

Leander started his sporting journey as young as 10-11 years as he played for the national football team.

He was also picked up by Barcelona Academy and selected for the junior team with a condition to give away his Indian passport and play for Spain.

“I caught flight back home to Kolkata and that’s how I gave up my dreams of a football player. I believed in Blue. After return, my father asked me what are you going to do now! You gave up your dreams! I said my passion is for India, my passion is for the flag.

When I decided to take up tennis, my father laughed for several minutes and that laugh still inspires me.

The 46-year-old became nostalgic. Although Leander is on a peak of success, he explained that his journey was never like a bed of roses. “At a point of time, I realized that if I give up today I will not be successful of what my parents taught me,” he said.

Talking about his secret to keep setting new bars, Leander said, “every year, in December which happens to be the off season, I  return to my team to gather new motivation and set new goals.”

“With bit of luck and little more hard work, I will be the proudest young man to go to Tokyo in 2020 and represent India,” the world record holder in Davis Cup for 44 wins said. Apparently, this will be his ‘One Last Roar’.

About his plans post retirement, Leander said that he has planned to visit every state of India to campaign for a healthy India. He will work to educate India and make it mentally and physically fit.

Leander closed his speech with a swing by throwing a challenge on the viewers of Odisha. He announced an art-work challenge (drawing, sketch, charcoal painting, graphic design, etc) based on the theme ‘‘One Last Roar”. The contest is open to all. The participant has to upload his piece of art on Facebook, Instagram or Twitter and tag Sambad Groups and Leander Paes on the post by March 19, 2020.

One lucky winner will be given a meet-and-greet chance for 15 minutes with the living legend of tennis.