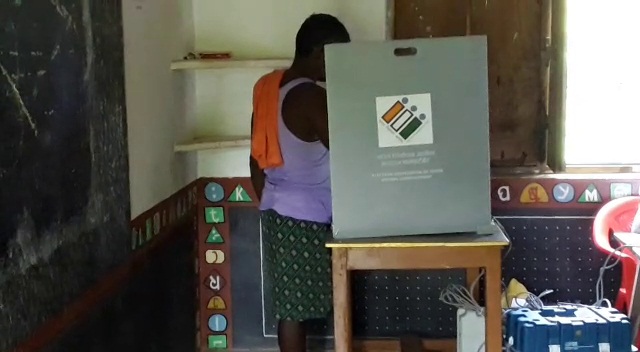 Kendrapara: The voting began for election to Patkura Assembly Constituency amidst tight security at all the polling stations in Kendrapara district today.

The voters were seen in long queue at the polling booths in the morning.

However, the polling was disrupted at some booths due to technical glitches in the Electronic Voting Machines (EVMs).

The polling was delayed at booth number 218 due to technical glitches. Even, the EVM glitches were reported from booth number 201.

A total of 2,44,747 voters will exercise their franchise in Patkura poll. Out of total 309 polling stations, 138 booths have been identified as sensitive. Total 10 candidates including BJD’s Sabitri Agarwalla, the lone woman candidate, BJP’s Bijoy Mohapatra and Congress Assembly nominee Jayanta Kumar Mohanty are contesting in the election.

Four companies of Central Armed Police Forces (CAPF) will be deployed and 40 CCTV cameras have been installed at various polling stations for smooth conduct of the poll.

The fate of three political bigwigs nominated by Biju Janata Dal (BJD), Bharatiya Janata Party (BJP) and Congress will be sealed in the EVMs in the poll.

While BJP is expecting to capture the Assembly seat, the BJD has given the best efforts to win the ‘prestige’ battle by fielding late popular leader Bed Prakash Agarwalla’s widow.

Meanwhile, the Congress is hopeful to get benefits from the two-corner fight.