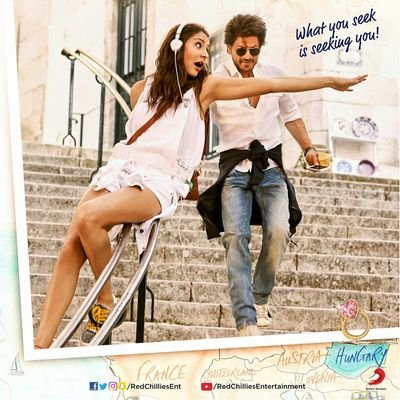 New Delhi:In India anything “free” works best, but Sony Music India decided to take a bold step by asking listeners to pay, for a limited time, to listen to the song “Phurrr”, featuring superstar Shah Rukh Khan and Anushka Sharma. Some in the industry say it is too much to expect any immediate change in attitudes, but hope people support the move that is aimed at killing piracy.

To be among the first to listen to “Phurrr”, by composer Pritam and American DJ-record producer Diplo, listeners will have to pay Rs 99 as it has been put behind a paywall for 24 hours across Thursday and Friday.

“We had to do it with a song that people were anticipating. Most people anticipate a movie, a film’s opening date, but they don’t know when the next song is coming out and how it’s going to be. Only when it releases do they decide whether they like it or not. There is very little build-up to the release of Bollywood songs,” Shridhar Subramaniam, President, Sony Music Entertainment – India and Middle East, told IANS.

But in the case of “Phurrr”, because of the Diplo collaboration and the fact that the music of the film, “Jab Harry Met Sejal”, is gaining momentum, a lot of Indians know that the song is coming.

And that is why, Subramaniam said, the Bollywood track was selected for the paywall experiment.

“In the West, for example, take Taylor Swift. Her music was always behind a paywall. That happened with Pink Floyd, The Beatles and some other legendary artistes who feel that consumers need to pay and, therefore, unless they pay, they shouldn’t be listening to their music.

“Some of the artistes feel that way because they don’t make enough money from recording, it’s only from performances. So, you can see an explosion in live shows, but not so much in recording. Indie music bands will perform and not really record because of this particular imbalance,” he said.

The reason why 24 hours was chosen was because “it’s a first, so you don’t want to give a shock to people. You must accept that India is still a heavily pirated market. People will find a way to get it for free some way or the other”.

For this to work out, the support of audio streaming platforms such as Saavn, Gaana and Hungama are needed.

“Right now, there are close to 50 million users monthly across all these music services. Out of 50 million, only 400,000 people pay — which is less than one per cent. There is a huge disparity; in rest of the world, 40-50 per cent of people are actually paying customers.”

“The creative industry only thrives if we have a well-balanced consumer ecosystem. Am not saying free is ever going to go away, but the people willing to pay should get benefits like getting to hear the song first, without ads, take it offline, share it with friends, and high quality. It’s not an outrageous, expensive programme,” said Subramaniam.

Prashan Agarwal, Chief Operating Officer, Gaana, said given that this song is a huge collaboration with Diplo, this looked like the right time to experiment.

“India is a unique market and thus it would not be right to reference how this strategy might or might not have worked in other markets. This is a limited period experiment, thus we do not foresee any effect on streams,” he added.

Mandar Thakur, Chief Operating Officer, Times Music, is also against the concept of “giving away stuff for free”.

“That by itself is a wrong business model because beyond a certain point, nobody will sustain,” he said. “The idea is to be able to create sustainable business models and I think this is the first of the steps from Sony. You will pretty much see everybody in the industry doing it. It’s a large industry effort.”

Popular singer Kailash Kher also supports the move, but cautions against expectation of immediate change in attitudes given the mentality of people who consume music.

“The initiative is nice, and I hope it works. Piracy is a deep-rooted problem in our country, but you should not expect a miraculous change,” he said.

“We have a habit of free things and when you get involved in something like piracy, it gives a kick. Most music consumers are aged between 14 and 30. They are the direct customers, and to do wrong things like piracy excites them. So, it will be a challenge,” he added.

Akshay Kumar to be face of Ayurvedic personal care brand