Peaceful protest in Odisha capital in support of Jallikattu 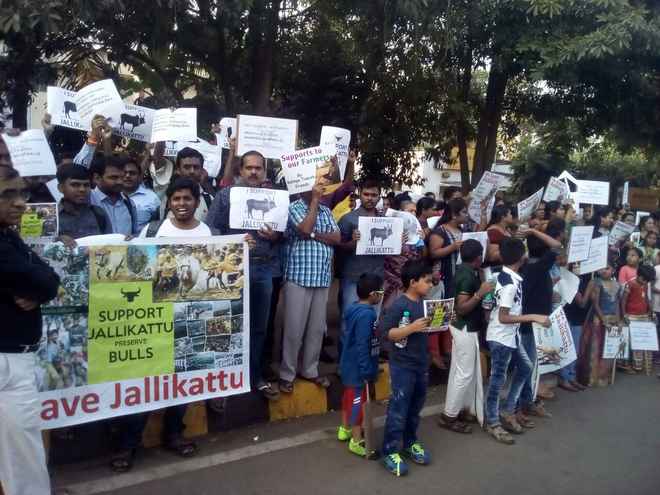 Tamil people residing in Odisha capital today took out a peaceful protest in support of Jallikattu to show their solidarity with the Tamil youth rallying throughout the world for the cause of Jallikattu.

The participants across age groups held the protest near Power House square in support of the festival organised on Makar Sankranti.

The rally was organised here by Kalinga Tamil Friends.

“The peaceful protest was organised for creating awareness about Jallikattu where the young men attempt to hang on to a speeding bull released into the crowd. They try to grab and hug the hump of the bull. The one which escapes is considered as the toughest and picked for breeding,” V Sridhar, the convenor of the Tamil organisation said.

We gathered here to express our solidarity and appealed to the people of Odisha and the state government to support the Save Jallikattu movement and protect native breeds, cultures and traditions from vanishing under the incessant attack of global corporations, he added.

Worth mentioning, international sand artist Sudarsan Pattnaik yesterday carved a sand art on Jallikattu with a message “Respect Culture Save Animals” on the beaches of Puri.

Notably, the 2,000-year-old Jallikattu sport is celebrated in Tamil Nadu and parts of Andhra Pradesh on Makar Sankaranti or Pongal day.

On the other hand, the Tamil Nadu government today cleared an ordinance to enable the holding of popular bull-taming sport Jallikattu in the state, a day after the Central government gave its nod.

The ordinance was signed by the Governor Ch VidyaSagar Rao. The Prevention of Cruelty to Animals Act will be amended through this ordinance.

Thousands of students and youths have been staging protest demonstrations on Marina Beach and at other parts of the state to demand holding of Jallikattu.

Chief Minister O. Panneerselvam said that all the hurdles were cleared to hold Jallikattu through the Ordinance.

He said the Ordinance was promulgated on Saturday by the government and Jallikattu would be held all over the state with all necessary safeguards.

Panneerselvam said the act will be passed in the coming Assembly session on January 23.

Panchayat polls held in abeyance in Odisha amid Maoist threats