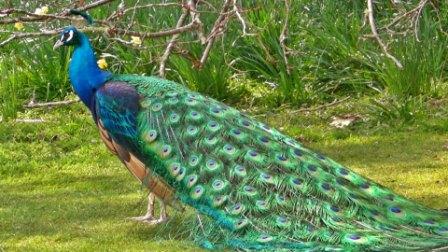 India’s national bird the peacock reproduces like any other bird, say Indian bird experts who have denounced claims by a Rajasthan High Court judge about the peacock being “celibate”.

“There is absolutely no truth in this. The peacock reproduces by copulation like every other bird. There is nothing scientific about this at all. We are the laughing stock of the world… People are aghast that such a thing can even be said,” noted ornithologist Bikram Grewal told IANS.

Rajasthan High Court Judge Mahesh Chandra Sharma said on Wednesday that “the peahen gets pregnant” only by “swallowing the tears of the peacock” and that peacocks don’t have sex.

He also suggested that cows should replace the tiger as the national animal because “it’s also holy”.

The Indian peafowl (scientific name Pavo cristatus) is also known as the blue peafowl and comes in Schedule-I of the Indian Wildlife Protection Act, 1972. This bird is listed as of
Least Concern (LC) by the International Union for Conservation of Nature (IUCN).

Male Indian peafowl shows the characteristic colourful tail feathers or train during breeding season. Its train makes the male peafowl one of the largest flying birds in the world.

Both the peacock and peahen have the avian reproductive organ known as a cloaca, which transfers sperm in between partners.

K. Sankar, Director of Salim Ali Centre For Ornithology and Natural History, who is known for his work with Asiatic elephants, deer, primates and tigers as also peafowls, said the mating process in the peafowls lasts only for a “few seconds”.

“In my 30 years of research, only on two or three occasions I have observed this phenomenon. Male has sperms, female has eggs. The male injects the sperm into the cloaca. The sperms go inside and fertilise the egg. They do mate,” Sankar told IANS.

“What he (the judge) has talked about is a myth. People see only dancing peacocks. It is the choice of the peahen to select the best male. Whoever dances the best and has the longest and tallest train feathers, that individual is selected by the peahen. The actual mating is not observed by many researchers or casual observers, and this happens only for a few fraction of seconds,” Sankar said.

The remarks of Sharma, who retired on Wednesday, have been widely criticised on social media. (IANS)