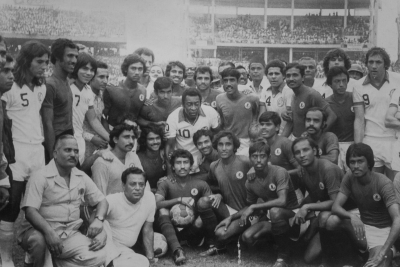 The iconic Eden Gardens in Kolkata normally gets jam packed for important cricket matches. But on September 24, 1977, the stadium was filled to the rafters for a football match — or more particularly, because just about anybody who could get a ticket or a pass had come to watch one player in action.

That player was none other than the Brazilian legend Pele, regarded by most football aficionados as the greatest player ever to grace the football field.

Pele visited India twice — the first time in 1977 as part of the New York Cosmos team, which he had joined towards the end of his career, travelling across the world to promote the game through exhibition matches.

On his second visit in 2015, Pele arrived in New Delhi and then went to Kolkata on a week-long tour. He witnessed the Subroto Cup U-17 final in Delhi.

It was his visit in 1977 that generated huge interest in the country and is still remembered by thousands of fans who had lined-up the road from Kolkata’s Dum Dum to his hotel and then from his hotel to the Eden Gardens, which had around 80,000 spectators.

It was an especially memorable visit for the team from the iconic Mohun Bagan club that played against the New York Cosmos and held the star-studded outfit, which also had Brazilian World Cup winner Carlos Alberto and Italian Giorgio Chinaglia, to a 2-2 draw.

“Lakhs of people gathered outside the Dum Dum Airport to greet the Brazilian legend. There were also teeming crowds outside his hotel in central Kolkata, waiting to catch a glimpse of the only man who had won three World Cups for his team,” football historian Novy Kapadia recounted the incident in his book, ‘Barefoot to Boots’.

The match is etched in the memory of players such as former India captain Subrata Bhattacharya, Pradeep Chowdhury, P.K. Bannerji, Surajit Sengupta and Mohammed Habib.

Bannerji and Chowdhury were tasked with marking the legend and they did a fine job. Habib had a great match and Pele later had a chat with the India striker and praised him for his performance.

According to another account, the Mohun Bagan players were so mesmerised by Pele’s presence on the ground that they abandoned their warm-up routine and just stood there to watch the Brazilian get ready for the match.

Many people would find it difficult to believe that an Indian club team was ever on the verge of victory against any outfit that had Pele in it. But it is a fact.

Admittedly, Pele, aged 38 at that time, was past his prime, but still enthralled fans with a superb display of his mercurial and magical skills.

Also, the Cosmos team, invited by some senior Mohun Bagan officials, did not get enough time to acclimatise and prepare for the match — also hampered by the ground, which was soggy due to overnight rain — and therefore managed to draw the match, thanks to a controversial penalty, after trailing till the fag end of the match.

Shyam Thapa and Akbar Ali had scored for Mohun Bagan and though the 80,000 fans, lucky enough to cram into the Eden Gardens, could not see Pele score a goal, it was still a moment of a lifetime for them to get a glimpse of the three-time World Champion and witness his sublime skills.

That memorable visit by the greatest footballer in the world has remained etched in the memory of all those lucky enough to get an opportunity to witness it.

It was Pele’s penultimate match as a professional and he retired from all forms of the game a few days later.

Pele’s most recent visit was to attend a conference organised by a leading newspaper. During that visit, the 75-year-old stayed in India for a week and visited Kolkata again, interacting with young players and administrators during his stay in the country.

As Pele passes on, many old-timers in Kolkata will be remembering the legend and his connection with India, especially with the City of Joy.

Pele: The King may have died, but his legend will live forever