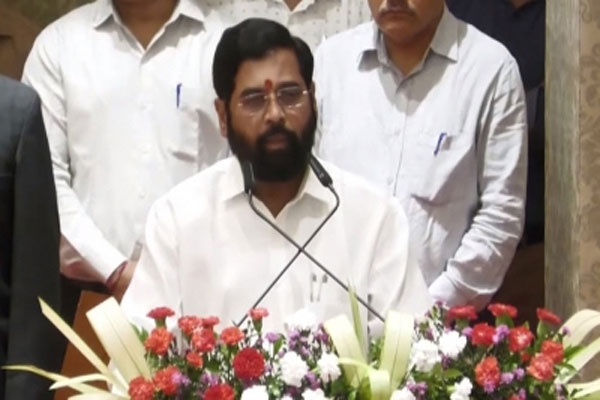 Share
Panaji: Calling it as a victory of the Hindutva ideology of Balasaheb Thackeray and teachings of Anand Dhige, Maharashtra Chief Minister Eknath Shinde has said that people will come to know if he visits ‘Matoshri’.

Shinde after being sworn in as the Chief Minister, came back to Goa Thursday late night and joined the rebel MLAs at the Taj hotel in Panaji.

The rebel MLAs of Shiv Sena, who forced Uddhav Thackeray to resign as Chief Minister, will continue camping in Goa and may go back before the floor test.

Shinde said that as they (BJP and rebels) have 175 MLAs, floor test will be just a formality and they will win it easily. “We have 175 numbers, the picture is clear,” he said.

“When the time comes, people will come to know if I visit ‘Matoshri’,” he said while replying to a question.

“This victory is of Hindutva ideology of Balasaheb Thackeray, teachings of Anand Dhige and unity of 50 MLAs. These MLAs have created history in Maharashtra. I congratulate them,” he said.

“Though the BJP had the number of 115 to 120 MLAs they supported me, I am a sainik of Balasaheb, with a big heart. Hence I thank Prime Minister Narendra Modi, Home Minister Amit Shah and BJP President J.P. Nadda, and also Devendra Fadnavis,” Shinde said.

“They have supported Shiv Sainik to become the Chief Minister. They have shown a way for the development of the state,” He said.

Shinde said that he is committed to resolve all the issues pertaining to the constituencies of the 50 MLAs who are with him.

“I will resolve their issues. I have all the records. There will be no shortage of funds to carry out the developmental works in their constituencies. It is my responsibility to fulfill the desires of voters,” he said.

“We are taking ahead Hindutva of Balasaheb, even Anand Dhighe has taught us to fight against injustice and raise voice against it. We will work as Shiv Sainiks and will take our state to overall development. All projects will be completed on time,” Shinde said.

“This is a historic incident. People hobnob for getting power, but they stepped out for development,” Shinde said.