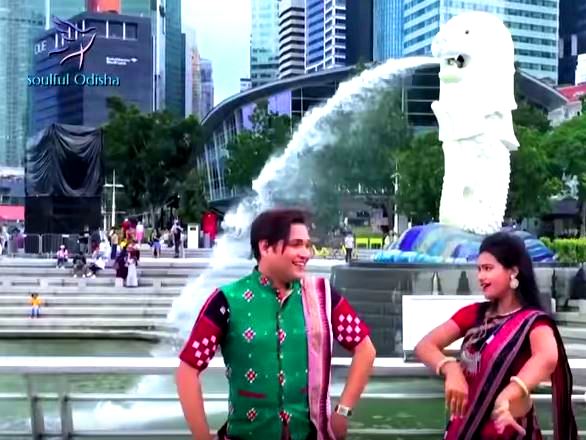 Bhubaneswar: After taking the Internet by storm with Sambalpuri folk dance in front of the Eiffel Tower in Paris and Odissi against the backdrop of Colosseum in Rome, internationally acclaimed Odissi dancer Saswat Joshi is back with another video, where he and his troupe members are seen performing at Maryland, Singapore, and Petronas Twin Towers at Kuala Lumpur in Malaysia.

This time too, it is a Sambalpuri folk number that they are dancing to.

“On the invitation of Indian High Commission to Malaysia, I had been to Kuala Lumpur and conducted Sambalpuri folk dance and Odissi workshops there. I also got to perform during the Utkal Dibasa celebrations in Malaysia and also in Singapore,” he said.

On the very day, April 1, he decided to shoot the song, which is very close to his heart. “I grew up listening and dancing to this song, ‘Aahare Kasi Lavanga’. Though the song was recorded for the movie in Sambalpuri dialect, ‘Bhukha’, it didn’t find screen space and was played only in All India Radio. It is a beautiful song, and I wanted to present it in a new form and nicer way for the world audience to appreciate and enjoy,” he said.

Saswat had changed the cassette into digital music file for the purpose. “I pick such iconic places as it then becomes easy to catch the viewers’ attention, while promoting our rich Odisha culture and tradition. It adds value to the performance,” he said.

The Sambalpuri song composed by Ramesh Kumar Mahananda, has been penned by Netrananda Barik, while Bijaylaxmi Dash and Mitrabhanu Biswal have lent their voice to it.

Saswat and his team from Lasyakala, Jagruti Rath, Asima Priyadarshini, Mona Lipsa Nayak and Bibhudutta Das, can be seen spreading joy with this song in foreign lands dressed in traditional Sambalpuri attire.

“In Malaysia, several local denizens joined in during the shoot and performed with us. It turned out to be a celebration of Odisha,” he added.

Relief for denizens as night temperature to fall across…