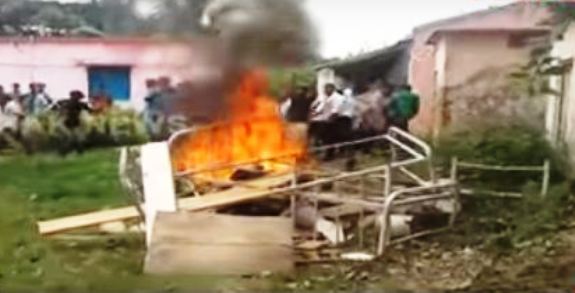 Kendrapara: Angry villagers today ransacked the premises of the Public Health Centre (PHC) at Babar in Gogua panchayat under Mahakalapada block in Odisha’s Kendrapara district protesting against the suspension of the pharmacist who had treated patients under a tree.

Protestors smashed and torched furniture, fixtures and whatever they could lay their hands on. Even the rickety old asbestos roof of the PHC was not spared, as irate villagers pulled it down.

Villagers said that it was the pharmacist who was like god to them as doctors never visited the PHC.

They said that since it was too hot inside the PHC in absence of lights and fans in sweltering heat conditions, the pharmacist was treating them under the shade of a tree.

“There were no fans inside in PHC. Temperature was soaring high. He was treating us under the shade of the tree as we had requested him to do so. No doctor has visited this PHC in the last three months. He has been rendering us health care in the absence of doctors. He is god to us. The CDMO should be immediately sacked,” said Deepak Kumar Swain, a local who was involved in the ransacking.

Director (Health Services) Dr Kailash Chandra Dash had on Monday directed the Kendrapara CDMO to suspend the pharmacist posted at Babar Primary Health Centre for discharging his duties under a tree.

Two days after media reported the incident of pharmacist of Gogua PHC treating patients under a tree in the hospital premises, Dash ordered the CDMO to suspend the pharmacist.

It may be recalled here that six patients were receiving intravenous fluids under a tree at the PHC.