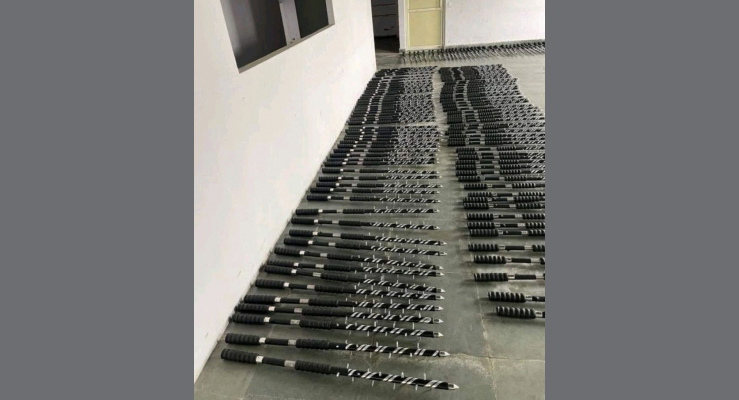 Kolkata: An untrained eye could mistake them for Chinese-made walking sticks used by trekkers in the high-altitude terrain. But Indian Army soldiers know better. Walking sticks for trekkers have firm grips and a pointy end for a better grip while going up or down slopes but they do not have lethal spikes sticking out.

These are specially-designed clubs for China’s People’s Liberation Army (PLA) personnel, the likes of which were used during the Galwan clash in 2020.

Over a hundred of them, seized from PLA soldiers between December 8 and 9, now adorn a room in the Tawang Sector of Arunachal Pradesh. These clubs are also designed to emit bright flashes during a clash in the night to temporarily disorient the opponent.

Fortunately, Indian soldiers at Yangste knew better. They didn’t allow the skirmish to carry on for long and beat back the adversary well before dark.

“PLA soldiers no longer come in combat fatigues when they attempt to breach the Line of Actual Control (LAC). They come in riot gear with body armour, shields and such clubs. We first saw the use of such clubs in Hong Kong during the uprising there. On December 8, the first attempt was made by the PLA to breach the LAC at Yangste, very close to the Sacred Waterfall known as Chumi Gyatse. The Indian Army respects the sanctity of the place but it seems that the PLA doesn’t though thousands of pilgrims from their side visit the waterfall throughout the year without any hindrance,” a source said.

On December 8, the Indian Army stopped a PLA patrol that had crossed over the LAC. While other members of the team rushed back, three PLA soldiers were captured. Their custody was crucial to establish that the PLA had actually crossed the LAC into Indian territory.

The matter could have been resolved peacefully but the PLA decided to launch a counter attack to free the three Chinese soldiers.

This happened on December 9. By then, the Indian Army was aware of what was to take place and were prepared.

“This was all part of a plan to set up an Observation Post (OP) there to look deeper into India. This is forbidden. On December 9, the PLA ‘riot squad’ arrived with over 300 personnel. Indian Army soldiers not only beat them back but captured 60 PLA soldiers with their spiked clubs. The retreating PLA soldiers left behind several more such clubs in a bid to get away from the blows the charged up Indians were landing upon them,” the source added.

Faced with a situation of having as many as 63 of their own in Indian custody, the PLA immediately called a truce.

A flag-meeting was convened and the Chinese soldiers were handed over. Their clubs and others collected from the scene of the skirmish were retained by the Indian Army and are neatly lined up in a room now.

China will never reveal how many of their soldiers were injured but the nine Indian Army personnel being treated at an Army Hospital in Guwahati are doing fine.

This was a strong message sent back to China that there will be no repeat of another Galwan.

Fisticuffs and a bit of stone-pelting may be tolerated but spiked clubs will no longer take the Indian soldier by surprise, another source said.

Almost 60,000 people have died of Covid in China in past…