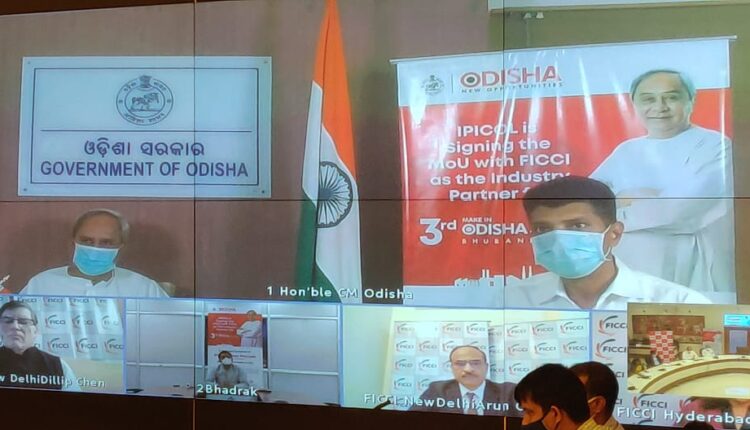 Bhubaneswar: The State has all the mechanisms put in place to realise the vision of making Odisha an investment destination of choice, both nationally and globally. Chief minister Naveen Patnaik reiterated it while addressing the MoU signing ceremony between the IPICOL and FICCI through video conference.

FICCI will be the national partner of the State to support investment promotion activities for the next edition of ‘Make in Odisha’.

He added that the 5-T Initiatives have brought about a change in Governance and making significant contribution to the overall industrial ecosystem of the state.

With the signing of this MoU, he expressed confidence that the state will take the next leap in terms of industrial growth and development.

Welcoming FICCI as National partner, Patnaik said that the Make in Odisha Conclaves in 2016 and 2018 brought in significant increase in the quantum of new investments resulting in creation of a diversified industrial base in the State and as an outcome, the state has established itself as one of the premier investment destinations in the country.

Highlighting the state’s superior performance as an attractive investment destination despite Covid-19, the Chief Minister said that even during these trying times, Odisha has undertaken various investment promotion activities and leveraged digital technology to reach out to the investor community.

This is evident by the fact that the state has attracted over Rs 24,300 crore worth of new investments since February 2020, he informed.

Industries Minister Dibya Shankar Mishra, joining from Bhadrak said that both the previous Make in Odisha were huge success with combined investment offers over six lakh crore.
He added that over 60 percent of these investment proposals are in various stages of implementation.

Joining from Hyderabad, FICCI President Sangitha Reddy said that Odisha has a special relationship with FICCI.

Highlighting the investment climate of Odisha, she said that Odisha has all the critical building blocks for success of the State.

The industries body is honoured to become the national partner and it will leave no stone unturned to make it a great success, she added.

Two videos highlighting the achievements of previous Make in Odisha and the revival of industries during Covid were screened on the occasion.

Together we can convert crisis into opportunity: Arun Sahoo…