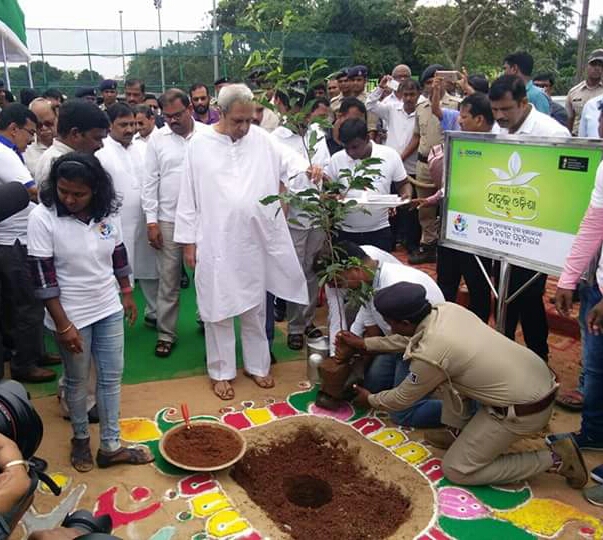 With planting the first sapling, Patnaik sent out a symbolic message across the State in support of the drive ahead of the mega international hockey event scheduled from November this year.

Under the Biju Yuva Vahini Plantation Drive, around 30 lakh trees will be planted with an objective to offset the carbon footprint are likely to be generated during the Hockey World Cup at Bhubaneswar. This activity will see the citizens of Odisha joining hands with the BYV members in striving for a Green Odisha.

Speaking at the programme organised by the State Youth Welfare Board, Patnaik said, “I am very happy and satisfied with the way Biju Yuva Vahini volunteers have worked tirelessly at Jagannath Ratha Yatra and helped clean the Puri beach. This plantation drives will make our state even greener. I request you all to create awareness regarding various campaigns of government pertaining to pollution and regarding non usage of plastic items. I repose my full faith and confidence it the Biju Yuva Vahini.”

Recently, Patnaik had come up with all praise for the initiatives to promote Hockey Men’s World Cup with Odisha logo seen in the buses operating in London.

3000 saplings to be planted to expand green cover in Odisha…

Our preparation for Odisha Hockey Men’s World Cup has now made its way to London! Sporting the Odisha logo & glimpses of our tourism potential, the buses in the British capital are introducing Odisha to the world, as a sports capital & hosts of #HWC2018 #Odisha2018 https://t.co/yqNoagBFFe

Odisha Sports & Youth Services Secretary Vishal Dev, who attended the event, said that people coming from different parts of the world to be part of Odisha Hockey Men’s World Cup Bhubaneswar 2018 will praise the greenery of the city.

“It’s an absolute delight to see how everyone in the state has come together to promote more greenery and cleanliness. Odisha is one of the greenest state in the country but is also prone to natural disasters which is why we have to take care of our flora and fauna everyday and this kind of volunteers will further strengthen our efforts in that direction. The teams and fans coming over from different parts of the world to be part of Odisha Hockey Men’s World Cup Bhubaneswar 2018 will surely be in awe of our city,” he said.

The campaign will also sensitise the general public to prevent the depletion of forests and to protect and expand the existing ones for future generations.

Peace museum to come up at Rasgovindpur in memory of 14 airmen!