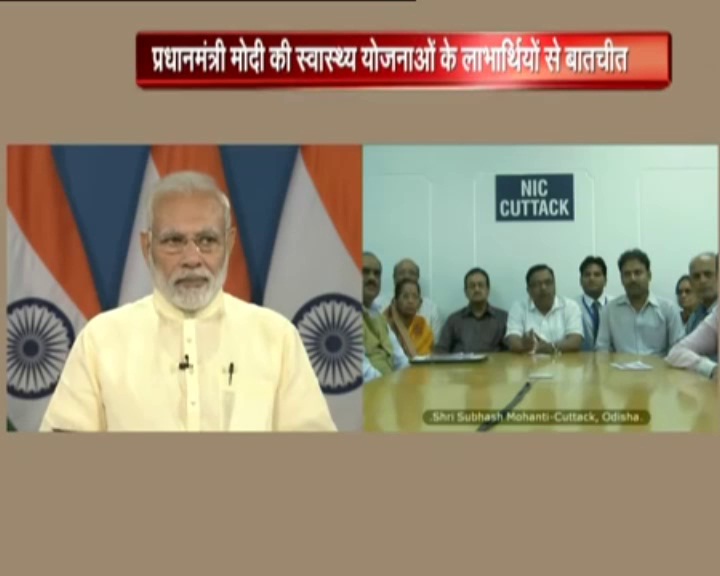 Cuttack: Prime Minister Narendra Modi interacted with one of the beneficiaries from Odisha through a video conferencing programmme while reviewing various healthcare schemes launched by the Centre.

Subhash Mohanty, a resident of Kesharpur in Cuttack district, was the only beneficiary from Odisha who got chance to have direct talk with PM Modi through video conferencing at Cuttack District Collector Office on Thursday.

He shared his experience with Modi that how he was benefitted from the Jan Aushadhi centres under Pradhan Mantri Bhartiya Janaushadhi Pariyojana that aims to provide medicines to people at affordable prices.

Mohanty is suffering from diabetes, blood pressure and cholesterol. However, with launching of the scheme, he can buy the medicines for his ailments at cheaper prices at Jan Aushadhi centres.

“I am having diabetes, blood pressure and cholesterol in past three to four years. Even my wife is also suffering from these ailments. Earlier, we were spending Rs 2,500 to Rs 3,000 on medicines every month. Now, we are getting the medicines at affordable prices under Pradhan Mantri Bhartiya Janaushadhi Pariyojna. The medicines cost around Rs 400 to Rs 500 at Jan Aushadhi centres,” Mohanty told PM Modi.

The Prime Minister Office also mentioned about the interaction on Twitter.

I am fighting blood pressure, diabetes and a cholesterol problem. Due to the Pradhan Mantri Bhartiya Janaushadhi Pariyojna, we are getting medicines at affordable rates. We spent Rs. 3000 earlier now it costs Rs. 400: Subhas Mohanty from Odisha

While talking to Mohanty in a lighter mood, Modi suggested him to reduce weight of his body to remain fit apart from consuming medicines from Jan Aushadhi centres.

Notably, Modi interacted with several beneficiaries of various healthcare schemes through video conferencing yesterday. He said that the government’s constant endeavour is to ensure affordable healthcare services to everyone in India.

Earlier, Modi had talked to a woman beneficiary of Ujjwala Yojana from Odisha through a video conferencing programme held on May 28 in Bhubaneswar.

Similipal Tiger Reserve in Odisha to remain closed from June 16