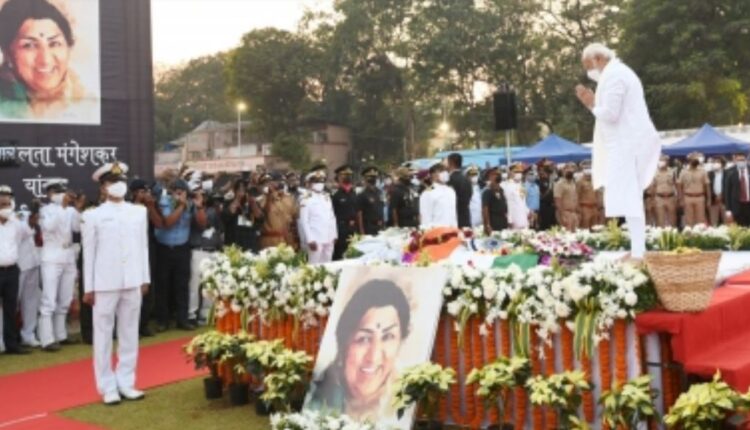 Mumbai: Prime Minister Narendra Modi on Sunday evening paid his respects to the mortal remains of legendary singer Bharat Ratna Lata Mangeshkar, whom he referred to as his ‘Badi Didi’ (elder sister).

Modi was among the first of VVIPs who went to the spot where Lata’s body was kept for people to pay their last respects at Shivaji Park.

He was accompanied by Governor Bhagat Singh Koshyari, Chief Minister Uddhav Thackeray, and other dignitaries like Deputy CM Ajit Pawar and Union Minister Piyush Goyal, many of whom enjoyed family relations with the Mangeshkars.

The PM then got down and walked over to the enclosure where the entire Mangeshkar clan including Lata’s sisters Asha Bhosale, Usha Mangeshkar, Meena Mangeshkar and sole brother Hridaynath Mangeshkar as well as grandchildren and other family members were present and offered his condolences to them.

After interacting briefly, Modi patted Uddhav Thackeray warmly, signifying he should take care of his health – as the CM has been suffering from a chronic spinal issue since the past three months.

Bharat Ratna Sachin Tendulkar – who had very close ties with the Bharat Ratna Lata – also turned up with his wife Dr Anjali and paid his last respects to the deceased singer.