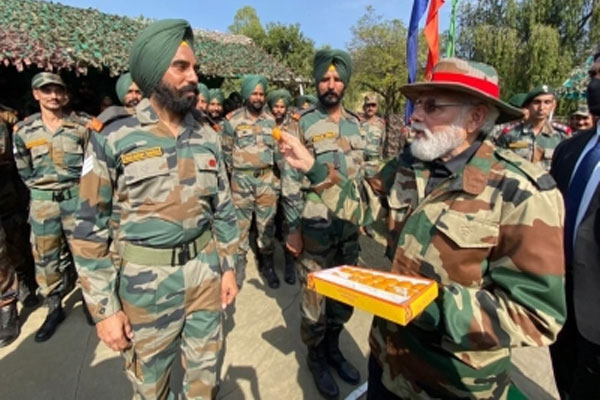 Jammu: Prime Minister Narendra Modi said on Thursday said that across the line of control (LoC) surgical strike in 2016 signified great professionalism and capability of the Indian army and that he was constantly on phone to ensure the last soldier returned home safely.

The Prime Minister arrived in Nowshera sector of Rajouri district to celebrate Diwali with the soldiers on Thursday.

He laid a wreath at the war memorial as a tribute to the soldiers who have laid down their lives for the country in J&K.

Addressing the soldiers, Modi said the 2016 surgical strike on the militant camps across LoC signified great professionalism and capability of the Indian army.

“I was constantly on the phone at the time of the surgical strike. I wanted to ensure that each soldier, who was part of the strike, should return safely.

“All the soldiers who carried out the surgical strike made me feel proud by returning to their unit safely”, he said.

“Many efforts were made to disrupt peace in J&K after the surgical strike, but our soldiers kept their morale high and defeated all such moves by giving a befitting reply,” Modi said.

He said that while the entire country celebrates Azadi ka Amrut Mahautsav to mark the 75 years of Independence, the government has new targets and new challenges ahead.

“There was a time when our forces were fully dependent on foreign arms.

“Our soldiers would wait for the spare parts of defence equipment from the foreign countries. It would take years to receive such consignments. The army officer who would sign the procurement deal had to wait till his retirement to receive the same.

“More than 200 items including spare parts and other equipment are being made in India itself.

“This way, we have reduced our dependence on foreign arms”, the Prime Minister said.

He said that from now onwards women would get admission in all defence schools, colleges and academies.

“Our army is different from the forces of other countries. It is because of your age old custom, tradition, great professionalism, and commitment towards your motherland.

“You worship your motherland and this is not seen in any other country. This is what makes you different from others.

“I am feeling privileged to be with you on the special occasion of Diwali”, the Prime Minister said adding that he will light a Diwali lamp to pay tribute to great valour, courage, discipline, professionalism and commitment of the country’s soldiers.

Happy Bhai Dooj 2021 Wishes, Messages to greet on the occasion

Bhai Dooj 2021 Date, Tithi and all you need to know