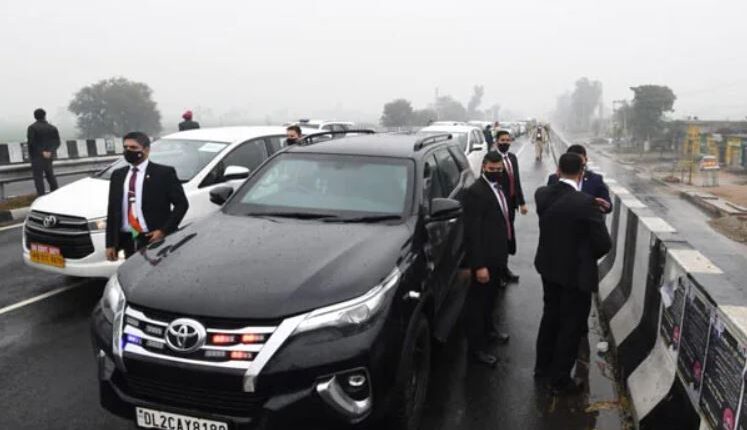 Ferozepur/New Delhi: In a major security breach, Prime Minister Narendra Modi on Wednesday cancelled his visit to Ferozepur town in Punjab, where he was scheduled to lay the foundation stones of Rs 42,750 crore projects, at the last minute.

Union Health Minister Mansukh Mandaviya announced from the venue that Prime Minister Narendra Modi would not be able to address the rally “due to some reasons”.

Mandaviya was here for the foundation stone of three medical infrastructures, including the 100 bedded PGI Satellite Centre in Ferozepur to be built at a cost of more than Rs 490 crore.

Earlier, the Prime Minister landed at Bhaisiana Air Force station in Bathinda town from where he was supposed to travel to Ferozepur by road.

As per the Ministry of Home Affairs’ statement on the PM Modi’s Punjab visit, “Today morning PM landed at Bathinda from where he was to go to National Martyrs Memorial at Hussainiwala by helicopter. Due to rain and poor visibility, PM waited for about 20 minutes for the weather to clear out.

“When the weather didn’t improve, it was decided that he would visit the National Martyrs Memorial via road, which would take more than 2 hours. He proceeded to travel by road after necessary confirmation of security arrangements by the DGP Punjab Police.

“Around 30 km away from the National Martyrs Memorial in Hussainiwala, when the PM’s convoy reached a flyover, it was found that the road was blocked by some protesters. The PM was stuck on a flyover for 15-20 minutes. This was a major lapse in the security of PM.

“The PM’s schedule and travel plan was communicated well in advance to Punjab Government. As per procedure, they have to make necessary arrangements for logistics, security as well as keep a contingency plan ready. Also in view of the contingency plan, the Punjab Government has to deploy additional security to secure any movement by road, which was clearly not deployed.

“After this security lapse, it was decided to head back to Bathinda airport.”

The Ministry of Home Affairs took cognisance of the serious security lapse and has sought a detailed report from the state government.

This was Modi’s first visit to the state after the repeal of three contentious farm laws.

Earlier in the day, state Finance Minister Manpreet Badal welcomed Modi at the airport in Bathinda. Chief Minister Charanjit Channi was to address the programmes virtually.

Just hours ahead of his visit, Modi tweeted, “I look forward to being among my sisters and brothers of Punjab today. At a programme in Ferozepur, the foundation stone of development works worth Rs 42,750 crore would be laid, which will improve the quality of life for the people.”

One of the road corridors will halve the travel time from 12 hours from the national capital to religious sites in Punjab, comprising Amritsar and Sultanpur Lodhi, and to Shri Mata Vaishno Devi Shrine in Jammu and Kashmir’s Katra.

After paying obeisance to freedom fighters Bhagat Singh, Rajguru and Sukhdev at the memorial in Hussainiwala, about 260 km from the state capital Chandigarh, the Prime Minister was to lay the stones and address a public meeting.

Modi last visited Hussainiwala in March 2015, where the last rites of the three freedom fighters were held after they were hanged in Lahore on March 23, 1931.