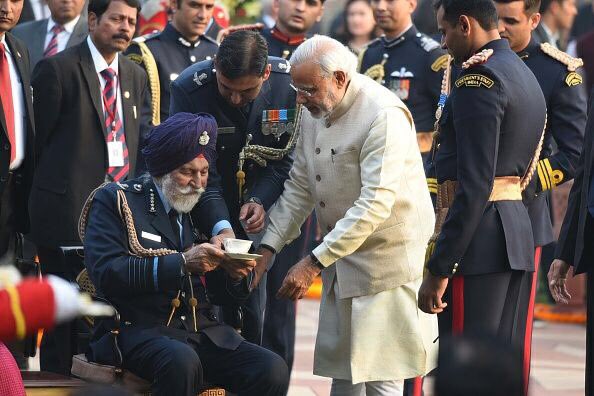 Ahmedabad: Prime Minister Narendra Modi on Sunday paid tribute to Marshal of the Air Force Arjan Singh, who passed away on Saturday at the age of 98.

“He was a brave soldier of our country. He was a hero of the 1965 war,” Modi said in Gujarat’s Kevadia, where he dedicated the Sardar Sarovar Dam to the nation.

“Even at the age of 98, he would be dressed in uniform. He would come on a wheelchair but whenever he would see me, he would stand,” he added.

“I requested him not to stand but he was a soldier, he never forgot his discipline.”

Modi said that the Marshal’s spirit was the same when he met him on Saturday at the Army’s Research and Referral Hospital where he was admitted following a cardiac arrest.

“We have lost a brave soldier. I pay my tributes to him. The nation will always remember his bravery and generations to come will be inspired by him,” he added.

In Delhi, Defence Minister Nirmala Sitharaman laid a wreath on the late air warrior’s body on behalf of the Prime Minister.
(IANS)

Odisha gears up for Durga puja, Cops on alert to control crime