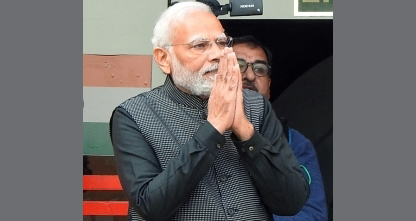 New Delhi: Prime Minister Narendra Modi will hold a review meeting of Directors General of Police (DGPs) of all states between January 20-22, where the focus is likely to be on measures to curb threats emanating from cross-border terrorism and arms smuggling, improving internal security, ensuring greater coordination between Centre and state police forces, as well as modernisation of the forces through greater usage of technology.

The meeting is also likely to discuss measures for combating extremism in Jammu and Kashmir, terrorist outfits in the northeast, and curbing Left-Wing Extremism, highly-placed sources said.

The three-day meeting would be presided over by Modi at the Indian Agricultural Research Institute (IARI) Pusa campus here.

DGPs of all the states are expected to be present in the meeting, sources said, where top police officials are likely to make presentations before the Prime Minister on the law and order situations prevailing in their respective states.

This meeting comes three months after the Prime Minister had virtually addressed a ‘chintan shivir’ of state Home Secretaries and Directors Generals of Central Armed Police Forces (CAPFs) and Central Police Organisations (CPOs), which was held between October 27 and 28, 2022 at Haryana’s Surajkund.

In that meeting, issues like modernisation of police forces, cyber crime management, increased use of IT in the criminal justice system, coastal security and land border management were discussed.

PM to inaugurate Pravasi Bharatiya Divas in Indore on Jan 9

Amid row over credit, Naveen thanks PM, Scindia for flight…