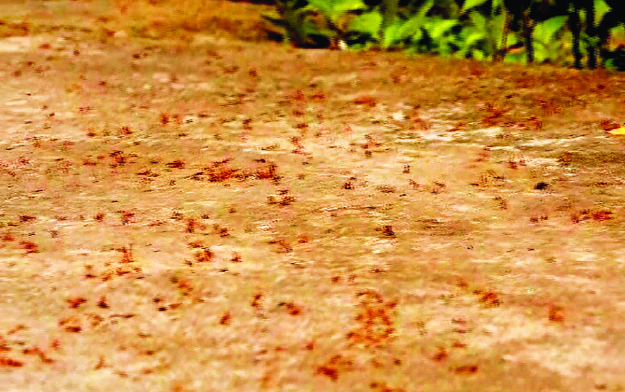 Pipli: Villagers of Brahmansahi under Chandradeipur pachayat in Pipli block of Odisha’s Puri district are a worried lot as lakhs of poisonous red ants have thrown their lives out of gear for the last two months.

While a family has already left the village due to the red ant menace, many others are planning to do so in the near future.

According to villagers, the red ants are creeping into their houses from the embankments of a nearby canal and many of them have developed skin rashes and itching after coming in contact with saliva of the invading insects.

“We have never seen such species of ants. They are also attacking lizards, frogs, centipedes, snakes, cats and dogs. The poisonous insects have already started dwelling in the mud walls of some houses. The family members of Kumuda Dash have already vacated their house. Many others are mulling to do so as the situation is deteriorating with each passing day,” said a villager.

Chandradeipur sarpanch, meanwhile, has raised the issue with Pipli Block Development Officer (BDO) and urged the administration to take immediate steps to contain the ant menace.