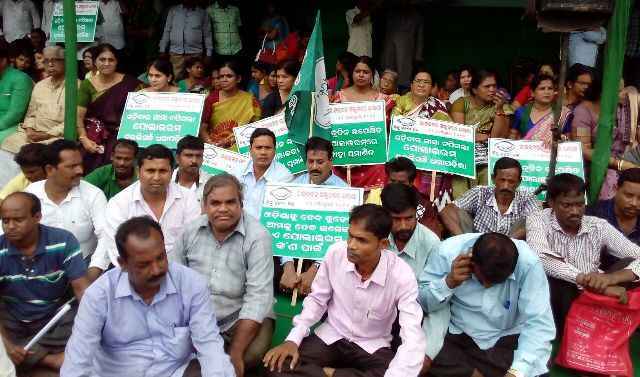 A delegation of the party led by senior Minister Lal Bihari Himirika submitted a memorandum to President Pranab Mukherjee through the Governor.

Several senior leaders of BJD took part in the dharna.

The party at the dharna alleged that due to the construction of Polavaram project some areas in Malkangiri and Rayagada districts will be submerged causing displacement of locals and tribals residing in these areas.

The party has alleged that it was the anti-Odisha mindset of the Central and Andhra Pradesh governments.

The party demanded cancellation of environment clearance issued to the project since it has been granted in violation of existing law.

“Odisha government is not opposing Polavaram project per se. We are opposing it since its height has been raised to 150 metres. No public hearing or gram sabha has been conducted in this regard. The National Green Tribunal (NGT) has served notice to the Central government on this account,” stated Samir Dash, BJD spokesperson at the dharna.

The BJD has planned to hold protest meetings in front of Collector offices in the seven southern districts of Malkangiri, Koraput, Rayagada, Nabarangpur, Ganjam, Gajapati and Kandhamal on September 20, BJD sources said.

Further, the party will observe peaceful strike across these districts on October 1.

Party president Naveen Patnaik has appointed observers and co-observers for each of these districts for smooth conduct of the programme, the sources added.