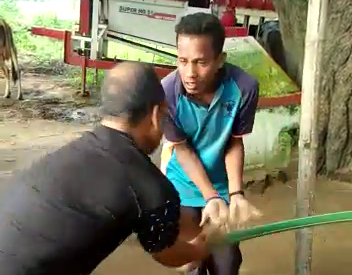 Boudh: In yet another show of police excesses in Odisha, a cop has been caught on camera thrashing a youth mercilessly in public in Boudh district. The incident came to light after the video went viral on social media.

In the video, a cop in a civil dress can be seen thrashing a youth with a thick plastic pipe in presence of other police personnel, who were in uniforms.The cop has been identified as Ranjan Mohapatra, a Constable posted at Reserve Police Office here.

Sources said a youth identified as Biswajit Chaulia Nilakanthapada village under Athamallik police station had allegedly been misbehaving with a girl for the last few days. Following complaints, Constable Ranjan caught hold of him yesterday, abused and later beat him black and blue with a plastic pipe. While Ranjan was in civil dress, a few other cops in uniforms were standing next to a PCR van on the spot.

No sooner the video went viral on social media, netizens started condemning the police excesses. Later, the Boudh police began an inquiry into the incident. As per latest reports, the Constable has been suspended from his post.

After Delhi, Odisha youth to launch Padayatra to Pakistan