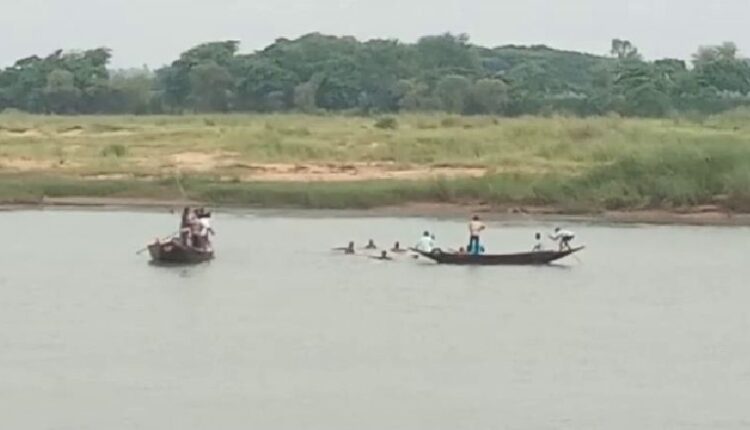 Pattamundai/Bhubaneswar: Residents of Dandasahi area in Pattamundai of Kendrapara district were amused a lot today by witnessing the game of hide and seek between the Pattamundai Police and a suspected thief in swelling Brahmani river.

After several hours of chase in the river water, the Pattamundai Police nabbed the suspected thief.

Earlier in the day, when the Pattamundai police went to Dandasahi to question the suspected thief, Bharat Mallick as part of a probe into a loot case at a temple in the village that occurred on July 2, Mallick ran towards Brahmani river and jumped into the water.

Locals who were near the shore chased Mallick in two small boats and tried to catch him. But, Mallick swam in the river and gave a tough time to the locals.

The police subsequently took the help of Fire Service personnel and chased Mallick in another boat. After a chase for hours, the police nabbed the suspected thief.

On July 3, a complaint was lodged at Chaudakulata police outpost under Pattamundai PS alleging that idols of Rama, Laxman and Sita and other valuable puja items were stolen from the temple the previous night. Suspecting Mallick’s involvement in the loot, the police had gone to question Mallick.

A senior police official said the three stolen idols and other valuable items were recovered from Mallick.

In his defence, Mallick said, “I never stole the idols. This is a false case against me. I entered the river water to make fun with the villagers.”

When asked about the recovery of the stolen idols from his house, Mallick said, “I cannot say from where these items were recovered.”