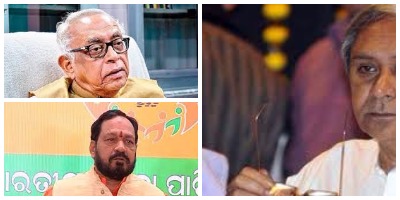 Bhubaneswar: A political blame game has erupted over a flyover collapse in Bomikhal area here on Sunday that left one killed and 11 others injured.

Soon after ruling BJD President and Chief Minister Naveen Patnaik ordered a high-level probe into the incident and assured exemplary action against the persons found guilty, Congress said it will raise the issue in Assembly.

“The bridge collapsed due to poor quality works. The contractors and engineers are responsible. Criminal case should be registered against the guilty. We will definitely raise this issue in Assembly,” said Leader of Opposition Narasingha Mishra after meeting the injured at Capital Hospital.

State unit of BJP directly put the blame on CM and demanded he should quit on moral grounds.

“It is an example of the low quality of work going on in the state. He should free himself of the responsibility on moral grounds and give the charge of PWD to a good person. Action should be taken against those who are guilty,” said Basanta Panda, President of the State BJP.

The Saffron party leader also said they will raise the issue in Assembly to corner the government.

“The CM should review the works on the field instead of doing so from AC rooms if such type of incidents to be avoided in the future,” Panda added.

Political leaders from BJP and Congress met the injured who are undergoing treatment at Capital Hospital and AIIMS here this evening.

Following the mishap, the State government has placed two senior engineers under suspension.

Earlier in the day, a man identified as Satyabrata Patnaik (40) of Jharpada was killed in the mishap, while over 11 others, including the minor daughter of Patnaik, were injured as a portion of an under construction flyover at Bomikhal collapsed.