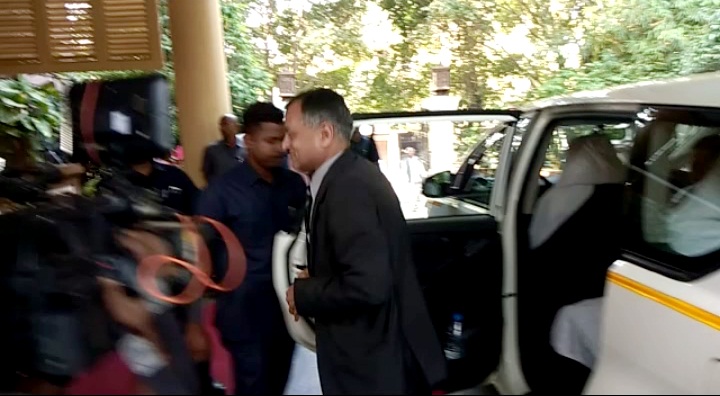 A six-member team of the ECI led by Election Commissioner Ashok Lavasa today reviewed the poll preparations for the upcoming general polls. The team discussed with the representatives of the BJD, BJP, Congress and CPI.

While Amar Patnaik and Sasmit Patra represented the ruling BJD, Leader of Opposition (LoP) Narasingha Mishra led the Congress for the review meeting with the ECI.

“The duty of EC is to conduct free and fair elections across the State and country. We informed the ECI about the involvement of BJP leaders in Bijepur assembly poll and urged the officials to take steps not to repeat such violence,” said Amar Patnaik.

“We also informed the team about the cash hoarding at petrol pumps and cash transferred through the petrol pumps. The attention should be given on the attempts being made for communal violence in the area to disrupt the election process. We also drew the attention of the EC officials requesting them to add the expenditure of the star and non-star campaigners to the candidates, not the party, he added.

The Congress also demanded the EC officials for the free and fair elections in Odisha.

“We urged for a free and fair election protecting the integrity of elections. We informed the EC about the misuse of government machinery during the polls,” said Narasingha Mishra.

He also suggested the EC to create awareness about EVM among the voters.

“We urged the ECI representatives to ensure the guidelines of the Election Commission to be followed properly and to take initiative to prevent the use of muscle and money power and misuse of government machinery during the upcoming polls,” he told media.

The BJP delegation headed by Bhrugu Baxipatra after meeting said, “We informed the EC team about possible poll rigging and violence by the BJD workers during the polls. The majority of poll booths have been occupied by the BJD to declare those as ‘sensitive’. We also informed about the previous poll violence in which the BJP workers were killed by the BJD workers.”

The CPI leaders demanded the ECI for removal of the EVMs and reintroduction of the ballot paper in the upcoming elections.

“The EVM machine has lost its credibility. So, we requested the ECI to reintroduce the ballot paper removing the EVMs in the polls,” said CPI former MLA Narayan Reddy.

He also urged the ECI to ban the communal forces like Biju Yuva Vahini and also ban liquor a week before the polls. He appealed to remove the hoardings carrying pictures of Prime Minister Narendra Modi and Chief Minister Naveen Patnaik.

Minor girl among 3 critical in jumbo attack in Odisha