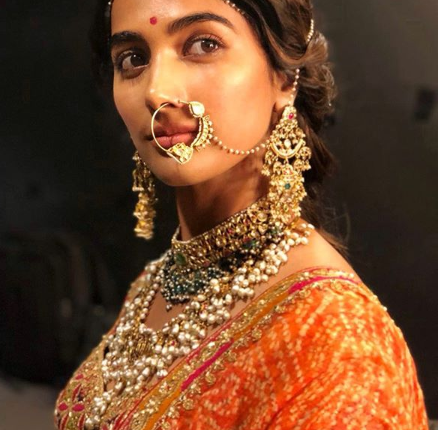 New Delhi: Pooja Hegde was one of the lead actors in the comedy-drama ‘Housefull 4’, which was released in October this year.

The film based on reincarnation spans 600 years from 1419 to 2019, and Pooja played the dual roles of a princess in heartland India and a modern daughter of a London-based don. The Film also starred Akshay Kumar, Kriti Sanon, Riteish Deshmukh, Kriti Kharbanda, Bobby Deol and Chunky Panday.

Recently, the actor shared pictures of her first test look from the movie in Instagram.

Pooja shared the picture with the caption, “Throwback to my first look test for #Housefull4 in my period look as Rajkumari Mala?? Just took out my phone and took some pictures in the dressing room to see how it was looking… what say?”

She also wrote, “I wanted to keep the make-up extremely minimal for #RajkumariMala as I wanted her to just look fresh, innocent and true to that time… Often it can get very challenging to maintain the same brief as it’s very easy to get carried away when u do a commercial film like Housefull 4. So glad that people loved the look and appreciated it.”

In the end, she asked her fans what do they think of the picture. Fans responded to the post with compliments and loving words.

One fan reacted, “U r the real queen…”, while another wrote, “You look prettier than picture.”

The actor will next be seen sharing screen space with Prabhas in K.K. Radha Krishna Kumar’s directorial venture “Jaan”.