Praises pour in for Odisha CM for COVID-19 curbing strategies

Yesterday, Odisha became the first state to extend the COVID-19 lockdown till April 30. 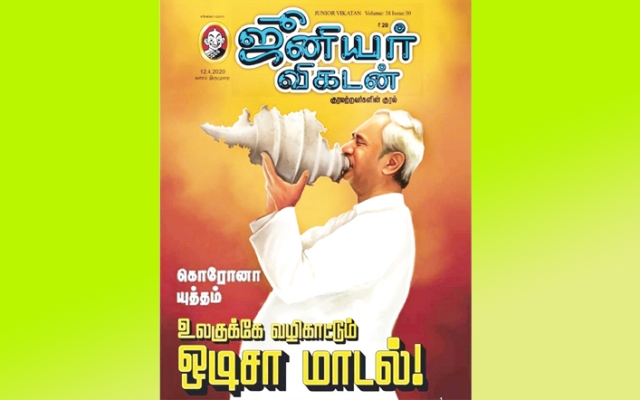 Bhubaneswar: Naveen Patnaik-led Odisha Government, which has been a trendsetter in disaster management on numerous  occasions, has once again earned accolades from all over the world for its strategies to combat the global coronavirus pandemic.

Praises poured in for Chief Minister Naveen Patnaik after Odisha became the first state to extend the COVID-19 lockdown till April 30. He has also written a letter to the Centre urging for extension  of the nationwide lockdown till April 30. Sharing a video message for the public, Patnaik yesterday said that he has urged the Centre to further extend the restriction period on flight and train services till the date.

Prime Minister Narendra Modi also appreciated the Odisha Government for all the combative steps for the pandemic and asked other Chief Ministers to take a cue from the state.

A Tamil Nadu magazine titled ‘Junior Vikatan’ has carried a photo of the five-time CM on its cover page captioning it that the entire world is following the Odisha  model to fight the battle against coronavirus. Not only Tamil Nadu, but several other national media houses are lauding the steps taken by the Odisha Government amidst the corona crisis.

This apart, Union Minister for Petroleum and Natural Gas Dharmendra Pradhan and Union Minister of State for MSME Pratap Sarangi have raised CM Naveen for his proactive steps against the ‘worst enemy’ of humanity.  Pradhan  took to Twitter and said extension of the lockdown till April 30 is a welcoming step by the Odisha CM.

COVID-19 outbreak: No exam to be held for remaining subject of Class 9 in Odisha