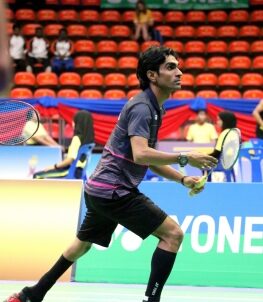 World No 2 Sukant Kadam also ended up with a bronze.

The World No 1 threw everything he had up his sleeves but the Brit had all the answers to Pramod’s questions. Earlier Pramod and his mixed doubles partner Palak Kohli also lost to an Indian pair of Ruthick Ragupathi and Manasi Girishchandra Joshi and had to settle for bronze.

The final score line read 17-21 17-21. Talking about the same Pramod Bhagat said, “It was a tough week and I couldn’t execute what I had planned for. I have identified my mistakes and will start working on them immediately. I am going to head straight back in to training and focus on my upcoming tournaments.”

On the other hand, Sukant Kadam lost to World no 1 Lucas Mazur from France. The tight match went to the decider set where Mazur managed to edge Sukant. The 50-minute match kickstarted with Sukant taking the first set 21-19 and Mazur fighting back and taking the second set 19-21.

The third and final set was taken by the French 12-21 to close the match. Mazur went ahead to secure gold medal defeating Tarun from India in straight sets with the score line of 21-7 21-9.

Commenting on the same Sukant Kadam said, “I had a decent run in the tournament and pushed Mazur to his limits, but came short. I am sure I will work on the mistakes from this game and be ready for the next tournament.”