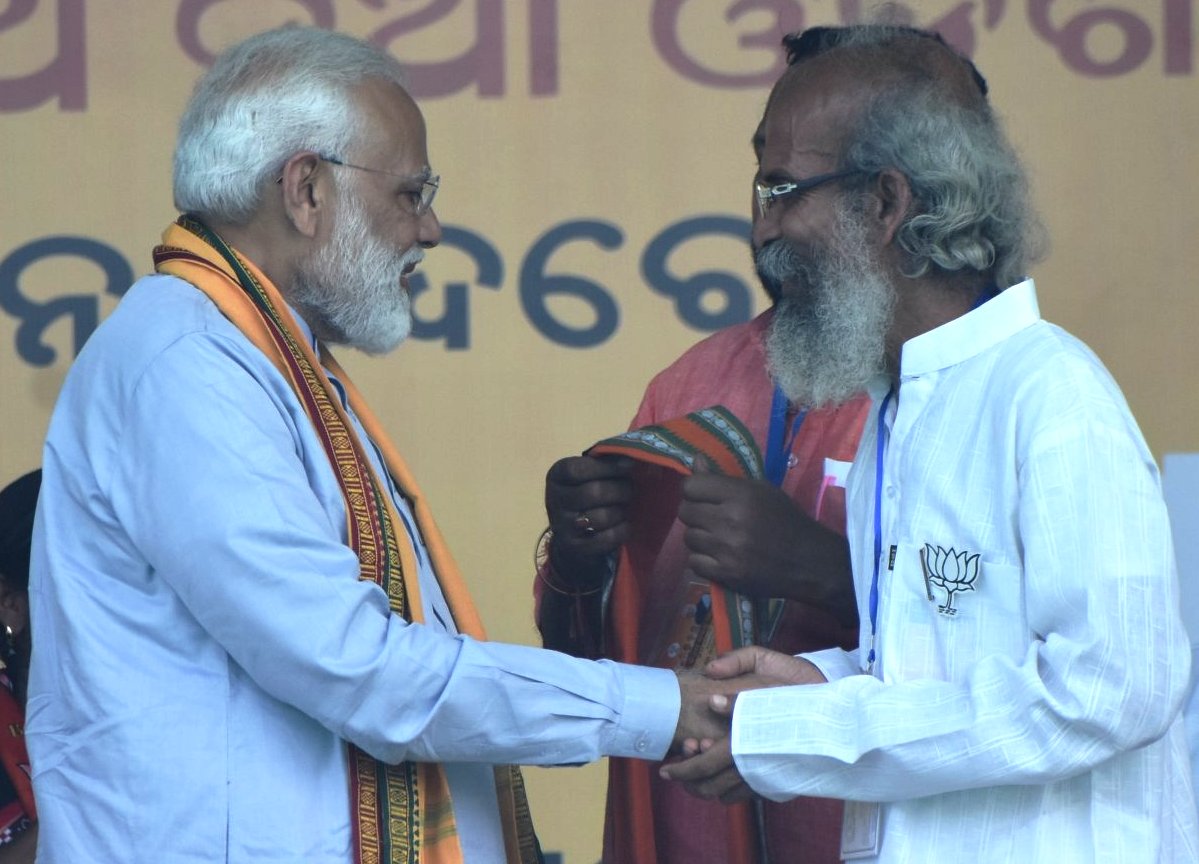 Bhubaneswar: Once he wanted to be a monk at the Ramakrishna Mission in West Bengal. Now he is winning millions of hearts with his simple lifestyle, a trait very rare among politicians.

Pratap Chandra Sarangi, the newly elected MP from Odisha’s Balasore, took oath on Thursday as Minister of State (MoS) in the Narendra Modi government. He has been assigned the Ministry of MSME and Animal Husbandry, Dairying and Fisheries.

After being elected to Parliament for the first time, the 64-year-old bachelor became an Internet sensation for his simple lifestyle and humble origin.

A photograph of him packing his bags in his thatched house in his village Gopinathpur to go to New Delhi, after being elected to the Lok Sabha, went viral on social media.

The social media was flooded with images of his austere life, riding a bicycle during election campaign, bathing at tubewell and standing in front of his kutcha house.

Many described Sarangi as ‘Odisha’s Modi’ since he lived with his mother, till she died last year.

Fondly called as ‘Nana’, Sarangi would be seen on the roadside waiting for public transport and at railway station. He is a politician who can be reached by common people.

“He is a simple and hardworking person. His victory shows that good people have still chance in politics and they can lead the nation,” said Prakash Nayak from Bhubaneswar.

Bibhu Panda from Balasore said Pratap Nana was a rare politician who has not amassed money.

Sarangi, who campaigned on bicycle and auto rickshaw, came out as a giant slayer after he defeated two of the richest candidates in Balasore.

Navajyoti Patnaik, the son of state Congress President Niranjan Patnaik, with assets of over Rs 104 crore, and outgoing BJD MP and industrialist Rabindra Jena, with assets of around Rs 72 crore, were contesting against Sarangi.

The affidavit of Sarangi, a two-time MLA from Nilagiri constituency from 2000 to 2009, says he has assets of around Rs 5.5 lakh.

The affidavit revealed that he does not own any vehicle or jewellry. Besides, he has no liabilities and has not paid any income tax in the last five years. Sarangi’s source of income includes MLA pension and agriculture.

Born to a poor Brahmin family on January 4, 1955, Sarangi graduated from Fakir Mohan College in Balasore in 1975.

He had worked as a clerk in Nilagiri College. He became an RSS member and subsequently joined politics.

“I had not expected that I would be a minister. It came as a surprise for me. I thank Narendra Modiji, the people who elected me and also the opponents. I have no experience and I would certainly take the help of my senior ministers,” said Sarangi.