Preparations for ‘Chandan Jatra’ at Puri in final stages 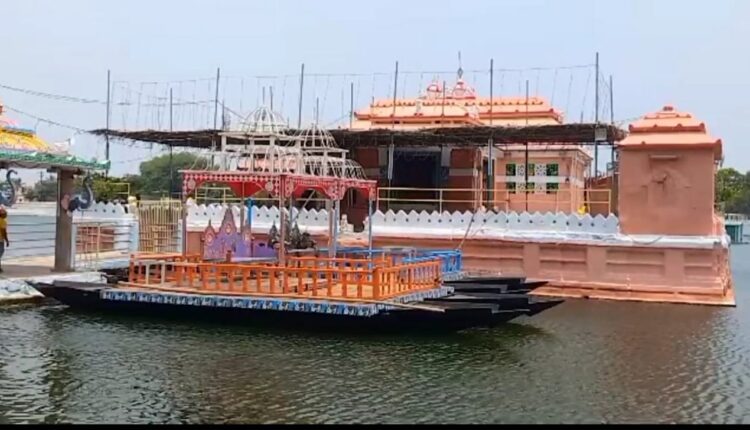 Puri: Preparations for the world famous Chandan Jatra at Puri on occasion of the Akshaya Tritiya tomorrow have reached final stages. The idol of Madanamohan, the living representative of Lord Jagannatha, and idols of Ramakrushna, Bhoodevi, Shreedevi and Panchu Pandava will ride boats, known as Chapa Krida, in the Narendra Pokhari tank in the evening from tomorrow during the 21-day Chandan Jatra.

As devotees will throng the pilgrim city in large numbers to witness the Chapa Krida after a gap of two years, the Puri District administration, district police and the Shree Jagannatha Temple Administration (SJTA) have made elaborate arrangements for the jatra.

It is worth to mention here that the Chapa Krida was held in the past two years in absence of devotees.

Also, chariot work for the world famous Ratha Yatra will kickstart from tomorrow with the anukula ritual at the pilgrim town.

Puri SP Kanwar Vishal Singh informed five platoons of police force, one Additional SP, three DSPs and six IICs have been deployed to ensure safety and security of devotees, and smooth vehicular movement during the jatra.

On Chaitra Poornima, the boats known as Nanda, Bhadra and Bajayantri were retrieved from the Narendra Pokhari tank and repaired by the Biswakarma Moharana and Bhoi Servitors ahead of the Chandan Jatra.

The Chitrakar servitors have also drawn wonderful paintings on the walls surrounding the Narendra Pokhari tank.

Following the Sakala Dhoopa ritual tomorrow, the Pujapanda servitors will take the agyanamala in a procession near the SJTA office where the Biswakarma Moharana servitors will chisel three Dhaura Katha wood logs for the chariot construction work.

The Ratha Khala or place where the chariots will be constructed has been set up in front of the Puri King’s palace.