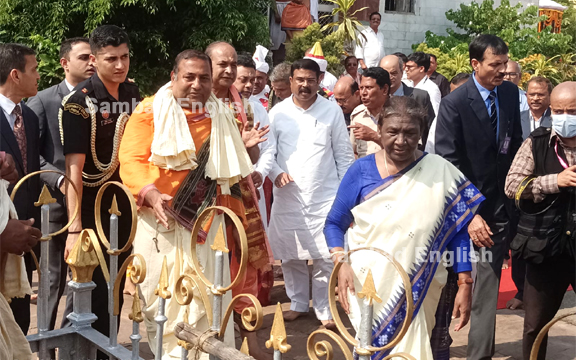 Puri: After paying her obeisance to the Lords at the 12th Century shrine – Jagannath temple here during her first official visit to Odisha, President Droupadi Murmu was deeply moved today.

Expressing her devotion in Odia language, the President wrote, “Today, I feel privileged after having darshan of the Chaturdha Murti (the Holy Trinity and Lord Sudarshan), including Parshwa Devatas (subsidiary deities) in Srimandir. I got a rare and divine feeling after paying my obeisance to Lord Jagannath – the most revered deity of Odia race.” 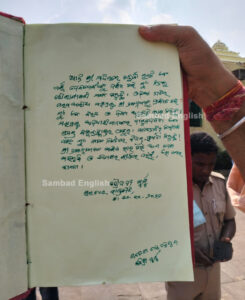 “The Lord is Daru Devata (wooden embodiment of the God Particle) of Adivasis (tribals) and Juggernaut of the entire Universe as well. I humbly bow down before Him seeking the welfare of humanity. May our country reach the heights of growth and development by the blessings of Lord Jagannath, this much I wish,” the first citizen of India concluded her handwritten note. 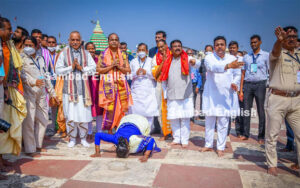 Murmu scripted history by walking down the street from Balagandi Square (near Medical Square) up to the Vaishnavite shrine after she landed at Talabania helipad in the pilgrim town.

The President was accompanied by her daughter Itishree Murmu, Union Minister Dharmendra Pradhan, Gajapati Maharaj Dibyasingha Deb, his wife Leelavati Patamahadei and several other dignitaries. She partook Mahaprasad at Raj Bhawan here shortly after her visit to the shrine.

It is pertinent to mention here that Murmu is on a two-day visit to the State.