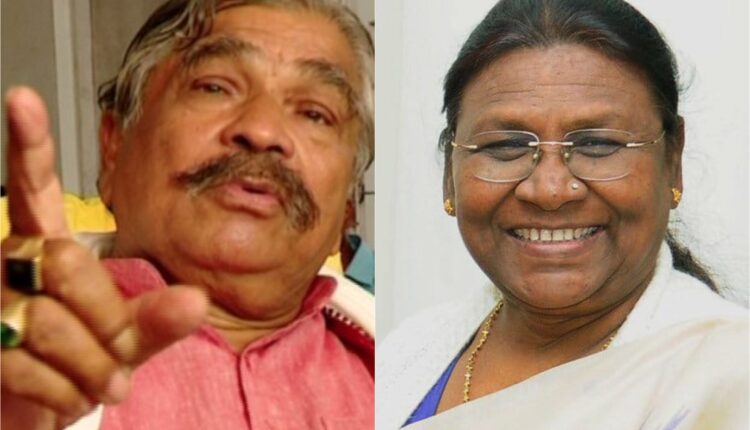 Bhubaneswar: A day after voicing support for Draupadi Murmu in the upcoming Presidential poll, senior Congress leader and MLA Suresh Kumar Routray today made a U-turn on his support to the presidential candidate of NDA.

Under immense pressure from the party, the Jatni legislator changed his voice and decided to cast his vote for Yashwant Sinha fielded by opposition parties.

“Pressure mounted on me from bottom to top in the party over support to Draupadi Murmu’s candidature. I have to follow my party’s order. I will no longer write to Sonia Gandhi in support of Draupadi Murmu. I will vote for Yashwant Sinha. As the party comes first, its whip has to be obeyed,” Routray told reporters today.

However, he hinted at cross voting during the Presidential election.

“The cross-voting is likely to take place for Yashwant Sinha in the poll,” the Congress leader said.

Yesterday, the senior Congress leader had told media that he will seek help from party high command to elect the NDA candidate unanimously as the next President of India.

“As an Odia, I am very happy and want that party president Sonia Gandhi should take steps for the unanimous election of Murmu as the next President of the country. I will write to the party chief in this regard,” Routray told media persons on Saturday.

However, he maintained that he will go with the party’s decision.

For the chief of state unit of Congress, the party is above the state when it comes to electing a candidate for the country’s top constitutional post.

“We are proud that Draupadi Murmu has been born in Odisha. We will sacrifice our lives for this soil. But, the fight is not for the state, it’s between the parties. Both NDA and UPA have fielded their candidates for the Presidential poll. We will do as per the instructions made by our party chief,” he said.

Reacting to Suresh Routray’s statement, Odisha Congress head said, “Suresh Routray is a senior leader in Congress and we have regards for him. He is an intellectual person and he will toe the party line. We will obey the party’s whip in the upcoming Presidential poll.”

When asked why Odisha Congress is not backing NDA’s candidate Draupadi Murmu, who is a tribal leader from Odisha, he said, “We will follow party’s order. Opposition Presidential candidate Yashwant Sinha hails from Bihar. Will the BJP in Bihar extend its support to Sinha’s candidature? We will see the percentage of votes for both the candidates at the end of the poll.”

Congress has nine MLAs in Odisha. Sources said that all of them will be proposers for the Opposition candidate Yashwant Sinha. The party MLAs, who had recently visited New Delhi for an organisational meeting, have been asked to go by party line in the Presidential election scheduled on July 18.