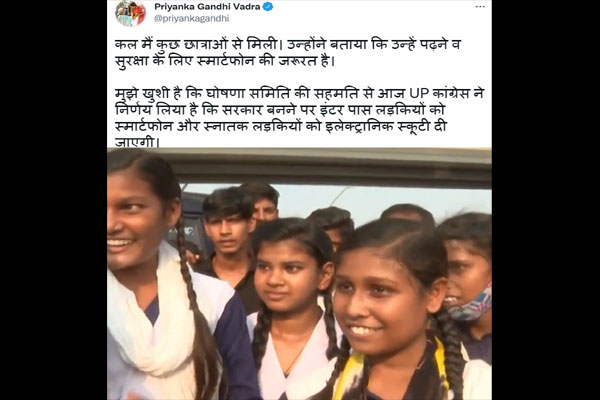 New Delhi: Congress General Secretary and in-charge of the Uttar Pradesh unit, Priyanka Gandhi Vadra has announced to give smartphones and electronic scooty to girls if the party comes to power in the state.

In a tweet in Hindi on Thursday, she said, “I met some students, they said they need smartphones to study and for security. I am happy that with consent of the manifesto committee, the UP Congress today took a decision to give smartphones to the girls who pass Intermediate and electronic scooty to Bachelor students.”

This is Congress’ one of major steps to attract and get the votes of women. Earlier, she had announced 40 percent tickets to women in Uttar Pradesh.

Priyanka, on Tuesday, had announced that her party would give 40 percent tickets to women in the upcoming Assembly elections. She said that all women who want to bring about a change in the system, are welcome to come forward and contest elections.

“Any woman who wants to contest can give an application till November 15,” she announced at a press conference.

After Priyanka, Rahul Gandhi also tweeted in Hindi and said, “The daughter of the country says – with our hard work, with the strength of education, with proper reservation I can go on and on.”